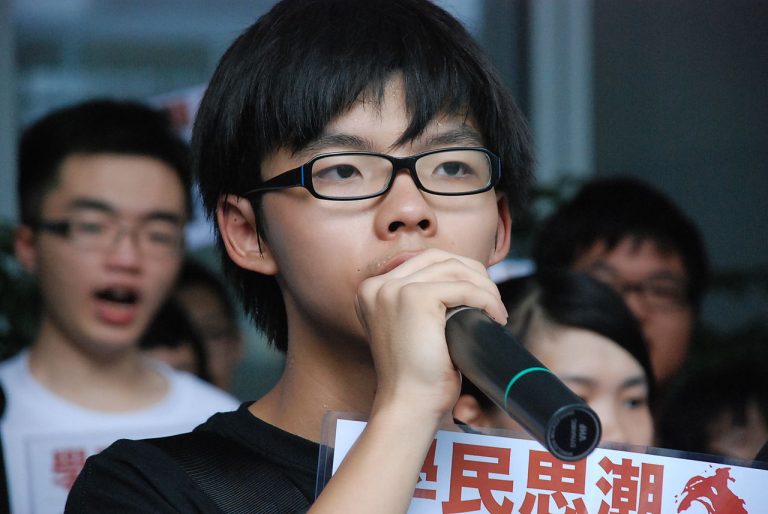 Joshua Wong and other well-known activists are featured as traitors in the game. (Image: via Wikimedia Commons)

Joshua Wong, the 21-year-old democracy activist from Hong Kong, has been awarded the 2018 Lantos Human Rights Prize. The Lantos Foundation award was received by Joshua’s associates since he has been barred from traveling to the U.S. where the ceremony was held.

In 2014, Joshua Wong spearheaded a 79-day pro-democracy protest in Hong Kong asking for fair and just elections in the region. The incident came to be known as the “Umbrella Revolution” after protestors shielded themselves from tear gas fired by the police using umbrellas.

Though Joshua was sentenced with community service, authorities in Hong Kong argued that the court was too lenient. In January 2018, the Hong Kong court decided to convict Joshua to a six- to an eight-month jail term. Fortunately, Hong Kong’s Court of Final Appeal quashed the verdict a month later, calling it unnecessarily severe.

“Joshua Wong’s inspirational mobilization of over 100,000 Hong Kongers to engage in peaceful protests on behalf of democracy and the rule of law has galvanized a generation of young people to become activists and to peacefully resist Chinese control of their government. He richly deserves the 2018 Lantos Human Rights Prize and we look forward to following this young leader’s trajectory,” Dr. Katrina Lantos-Swett, President of the Lantos Foundation, said in a statement (Benzinga).

Joshua was also nominated for the Nobel Peace Prize by a group of U.S. lawmakers, a move that, of course, sparked intense criticism from the Chinese communist government.

China’s assault on Hong Kong’s freedoms has meant that many youngsters today identify with being called Hongkongers rather than Chinese. In fact, a survey by the University of Hong Kong found that as many as 70 percent of people aged between 18 and 29 preferred being identified as Hongkongers.

However, the Chinese Communist Party’s (CCP) influence in Hong Kong has grown so sharply over the past years that many pro-democracy activists are afraid that they are losing the war against Beijing.

“Some young people now no longer believe China will give the city democracy under the ‘one country, two systems’ model… It is therefore only natural for those who do not want to give up on Hong Kong, to look for a new way out — even though fighting for Hong Kong independence will be more difficult than universal suffrage,” Dr. Chan Kin-man, a democracy activist, said to the South China Morning Post.

In a letter written to Hong Kong Chief Executive Carrie Lam, Human Rights Watch asked the politician to stand up against Beijing and protect the rights of Hong Kong citizens.

“The Chinese government has kept chipping away at Hong Kong’s freedoms and has stepped up these efforts in recent years… From publicly intimidating an academic for his peaceful speech to barring pro-democracy figures from public office, what emerges is a chilling offensive against basic rights in Hong Kong,” Sophie Richardson, China Director at Human Rights Watch, said in a statement (HRW).

The organization called on Lam to end political censorship in education, withdraw a proposed law that would criminalize “insults” to the national anthem, and investigate the Chinese government’s interference in publishing freedom. It also demanded that all charges against pro-democracy activists and opposition leaders for their peaceful protests be dropped.