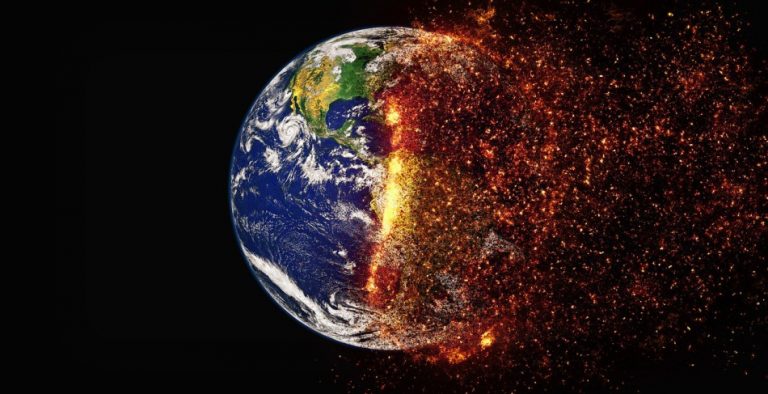 About 252 million years ago, a rise in global temperatures resulted in one of the biggest mass extinctions in Earth’s history. (Image: via Pixabay)

About 252 million years ago, a rise in global temperatures resulted in a massive mass extinction in Earth’s history called the Permian mass extinction. Almost 96 percent of marine animals and 70 percent of land animals perished. All this happened in just a few thousand years. Scientists warn that a similar fate might await us over the next few centuries.

This mass extinction took place at the end of the Permian period. In Siberia, volcanoes started spitting out magma and lava on a massive scale, emitting toxic amounts of carbon dioxide into the atmosphere. The gas eventually trapped heat and caused the surface temperatures to rise.

As per estimates, ocean temperatures rose by about 18°F, killing off innumerable species. The reduction in oxygen in the waters is also believed to have led to the end of many marine animals due to asphyxiation.

“This really would be a terrible, terrible time to be around on the planet…  It shows us that when the climate and ocean chemistry changes quickly, you can reach a point where species don’t survive. It took millions of years to recover from the Permian mass extinction event, which is essentially permanent from the perspective of human timescales,” Jonathan Payne, a scientist from Stanford University, said to The Guardian.

Researchers who have studied the Permian extinction draw close parallels to current environmental changes. Just as with the Permian period, the climate is getting warmer. Some studies estimate that the Earth could warm by almost 17°F by 2300 if we continue with our current rate of fossil fuel usage.

By the end of this century, temperatures could rise by 3°F. And in the past 50 years, the level of oxygen in the oceans has already plummeted by 2 percent. “Left unchecked, climate warming is putting our future on the same scale as some of the worst events in geological history,” Curtis Deutsch, an earth scientist at the University of Washington, said to The New York Times.

Reduced oxygen in the oceans will trigger a mass extinction of marine life. This will disrupt the food chain and eventually come to affect human survival in a big way. Plus, the warming climate will make agriculture in several parts of the world impossible or at least uneconomic. Deprived of a continuous food supply, human societies would crumble and there will be widespread conflicts and deaths.

The only way to prevent such catastrophic situations is through united international efforts to keep carbon emissions in check. Though some climate activists tend to go overboard and suggest that there must be an immediate cessation of all fossil fuel usage, this obviously is not a practical path. Such a turn of events would disrupt global economies and cause international conflicts.

Instead, all nations should pool their resources together to fund studies to develop alternative sources of fuel to power our vehicles and industries. With a combined effort, humanity should be able to pull through its most challenging survival test yet.