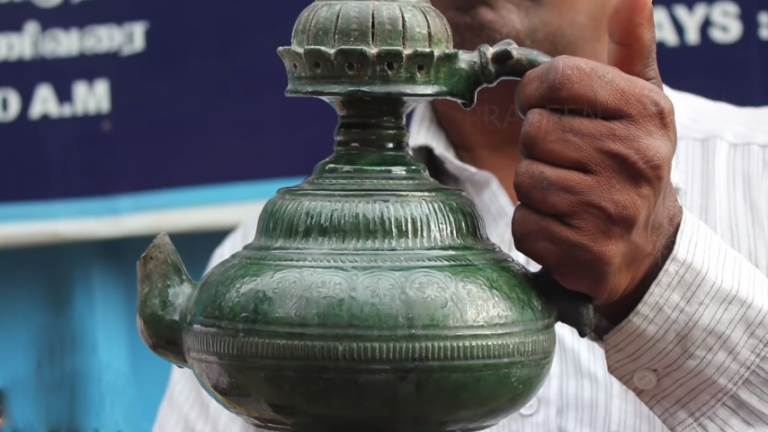 What if you filled a jar with water, flipped it over, and the water didn’t spill out? (Image: via Nspirement)

What if you filled a jar with water, flipped it over, and the water didn’t spill out? Anti-gravity jars with such seemingly “magical” capabilities were created in India about 300 years ago, displaying how well people of those times used basic scientific concepts to create some mind-blowing things.

One of the anti-gravity jars is currently on display at the Museum of Kancheepuram. Though it looks as if the jar is made of wax, it’s actually made from clay. The jar does not have a lid to open so it can be filled. Instead, one has to flip the jar upside down and fill it with water through the five holes at the bottom.

However, if you flip the jar back to its upright position, the water does not flow out from the bottom holes. It remains inside the jar as if by magic. The only way to retrieve water is from the spout at the top. There are also no moving parts inside the jar. So what is the secret behind the trick? According to this YouTube video, twin funnels with a 90-degree bent pipe were installed inside the jar to pull it off.

Such anti-gravity jars were usually made in a village called Karigiri, as a result of which they came to be known as Karigiri jars. The potters in the village were so creative and skilled that they are said to have built about 100 varieties of such “magical” jars, out of which 12 are believed to exist presently. Today, such jars can only be found in museums.

However, India’s creative accomplishments with science are not just limited to such anti-gravity jars. There is a temple in South India that features a hanging pillar that looks like it completely violates the rule of gravity.

The “anti-gravity” pillar can be found at the famous Lepakshi Temple (also known as Veerabhadra Temple) in the state of Andhra Pradesh. The hanging pillar can easily be discovered in a few minutes of exploring the temple since it usually attracts a crowd of people. The bottom part of the pillar is completely detached from the floor. Hence the name “hanging” pillar.

People put a piece of cloth underneath the pillar and slide it to the other side to confirm that the pillar is not attached to the ground in the slightest. This typically results in a wondrous expression on their faces. The temple was built in the 16th century in the Vijayanagar style and has amused people for hundreds of years.

During British colonization, an engineer from Britain even tried to move the pillar to uncover its secrets. However, the attempt was unsuccessful and the whole structure of the temple started shaking. This scared the engineer so much that he stopped trying to move the pillar and ran for his life.

The temple also has a 24 x 14 foot mural of Veerabhadra, the fiery god created by Lord Shiva. Interestingly, it is said to be the biggest mural of any single figure in all of India. Another curious attraction at the temple is the “footprint of Sita,” which, according to local legends, was created when the goddess Sita stepped inside the temple thousands of years ago. The footprint is surprisingly cleanly cut and is worshiped by the people who visit the temple.