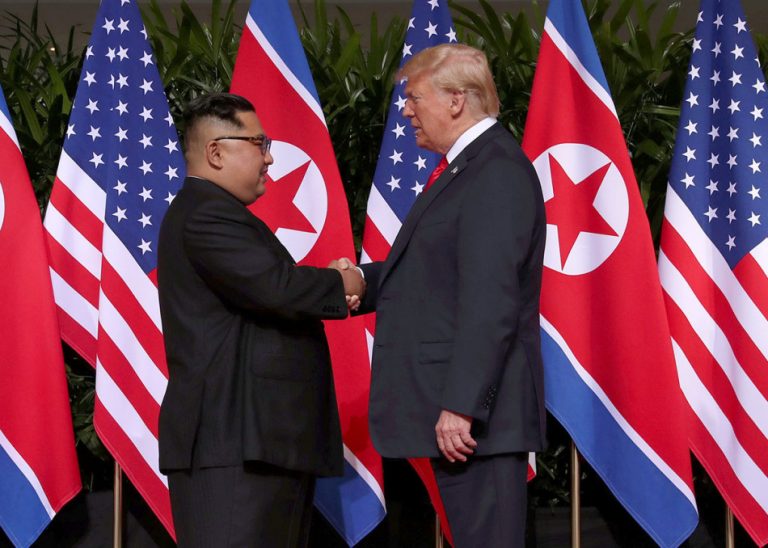 The leaders of the U.S. and North Korea attended a joint meeting in Singapore to work out their issues, the most important being the denuclearization of North Korea. (Image: Screenshot via YouTube)

The year 2018 was filled with some major events that not only shaped how the year turned out, but also laid the foundations of how the next few years will evolve. In this roundup, we look at the top 5 major events that kept hogging the headlines in 2018.

This might just be the number one covered topic all across the world, right from the east coast of America to Japan. And there is a good reason for this — both the U.S. and China are global superpowers that have a huge stake in how the world economy functions.

China had been engaging in theft of American IP for a very long time, costing billions of dollars in losses to U.S. companies. Some of the trade practices of China also put the U.S. at a disadvantage, keeping its manufacturing sector numb. U.S. President Trump asked Beijing to stop stealing American intellectual properties and set up a fair trade policy. After it became clear that China had no interest in changing its behavior, the U.S. administration initiated the “trade war” by slapping tariffs on Chinese imports. China retaliated with duties on U.S. imports.

Later on, China softened its stand, with reports suggesting that it was open to negotiating with America. The G20 meeting in November resulted in a trade war “ceasefire” between the two nations. However, experts predict the conflict to extend well into 2019 due to shady practices of Beijing. As of now, every country is hoping for the trade war to end before the entire global economic structure is ripped apart.

In early 2018, the tech world’s biggest scandal of the year broke out. Data mining company Cambridge Analytica was found to have harvested personal information of millions of Facebook users over several years without gaining their consent. The company later used it for political purposes, including influencing the 2016 U.S. presidential campaign and the 2016 Brexit vote.

While Facebook CEO Mark Zuckerberg admitted that his company was responsible for the data breach during testimony before the Congress in April, the scandal refused to die down and remained a hot topic throughout the year. For the first time, governments across the world realized that their citizens could be easily manipulated by outside forces.

For the first time in many years, U.S.-North Korean tensions showed signs of easing. The leaders of both countries attended a joint meeting in Singapore to work out their issues, the most important being the denuclearization of North Korea. Though no concrete resolutions came out from the meeting, it was deemed successful enough. President Trump even claimed that North Korea was “no longer a nuclear threat.” Going into 2019, it remains to be seen whether the newfound goodwill between the two nations yields positive results.

When U.S. intelligence agencies found Huawei to be a security risk to the country, President Trump banned the use of the company’s products in government agencies. Though Beijing tried to accuse the U.S. of being against “Chinese interests,” the accusations soon became worthless as even more countries banned Huawei. Australia, New Zealand, and Japan joined the U.S. in banning the company’s proposed 5G rollout in their countries. Several European countries and the UK are said to be considering implementing a ban on Huawei products. Meanwhile, Canada is caught in a spat with China after it arrested the company’s CFO as per an extradition treaty with the U.S.

Indonesia was in the headlines for the very wrong reasons — it suffered multiple natural disasters that killed thousands of people. In August, a 6.9 earthquake struck Bali and Lombok, killing almost 468 people. The very next month, an earthquake that clocked 7.5 on the Richter scale and a subsequent 20-foot tsunami claimed over 2,700 lives. More than 330,000 people were left homeless. And just when Indonesians thought they had suffered enough, nature dealt them another blow in late December in the form of a tsunami resulting from a volcanic explosion. At least 430 people lost their lives in the catastrophe.