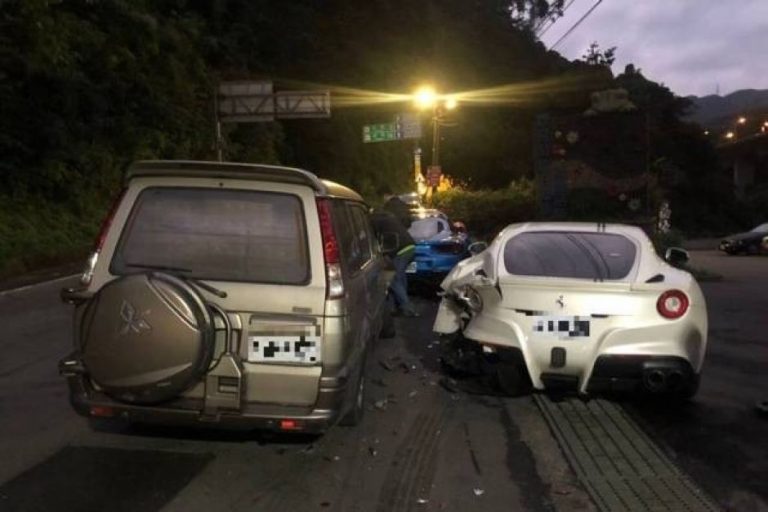 A 20-year-old Taiwanese, Lin Chin-hsiang, has been asked to pay approximately US$390,000 (12 million Taiwanese dollars) in damages after he crashed into four Ferraris while delivering an order to a temple. (Image: via New Taipei City Police Department)

A 20-year-old Taiwanese, Lin Chin-hsiang, has been asked to pay approximately US$390,000 (12 million Taiwanese dollars) in damages after he crashed into four Ferraris worth a combined estimated value of US$2.8 million while delivering an order. To his good fortune, the people of Taiwan seem to have taken pity on him and have chipped in to help him pay off the damage to the Italian supercars.

Lin has two siblings, lives with his mother, and dropped out of school to work nights at a barbecue restaurant in Taipei and help out at the family shop — a sheet-metal shack that also serves as their home. Because his mother was not feeling well, he was helping her deliver goods early in the morning when the crash occurred.

While driving his Mitsubishi delivery van, Lin fell asleep from exhaustion near the Danlan Suspension Bridge and crashed into the four Ferraris in the pre-dawn hours. Fortunately, Lin was uninjured, and all four Ferrari owners were out of their cars and talking when the crash occurred. The police soon arrived and confirmed that Lin was not speeding and had no alcohol or drugs in his system. Still, Lin was gripped with the fear as he realized that he would probably have to pay for the damage to the four parked supercars.

When local media came to know of the accident, they contacted repair stores and calculated that Lin would be liable to pay around US$390,000 in damages. Lin was shocked. There was simply no way he had the money to pay off such a huge amount. Considering that his monthly salary was around US$1,130, it would take Lin almost 28 years to pay off the debt. Fortunately, his story became viral and earned public sympathy. And something magical happened — people started to help Lin pay off his huge debt.

A student from Australia, who is in Taiwan as part of a student exchange program, visited Lin’s mother’s store and handed over 50,000 Taiwanese dollars. A local trader, who operates a paint importing business, offered to help out with part of the repair costs. Local authorities even set up an official account where the public can send in their contributions. More than 100 people have sent money, totaling about US$24,000 (740,000 Taiwan dollars).

“I’m really grateful to everyone who has offered to help and who has come here to encourage me. Some people even drove up from central Taiwan and asked me where they can donate money. Some spent a long time looking for our shop, some are not in a good situation, but they still gave money… Some people gave 5,000 (US$160) or 10,000,” Lin said to the BBC.

Though social media users asked the Ferrari owners to take pity on Lin and forgive the money owed to them, the owners were pretty adamant about getting paid. One owner stated that he had worked very hard to save money to buy his Ferrari.

Lin sided with the owners, saying that it would be unfair if he refused to pay for the damages he had caused. However, the owners have promised Lin that they would speak with their insurance companies and try to lower the damages he owes. For now, Lin’s supporters are hoping that enough people pitch in to help him out.