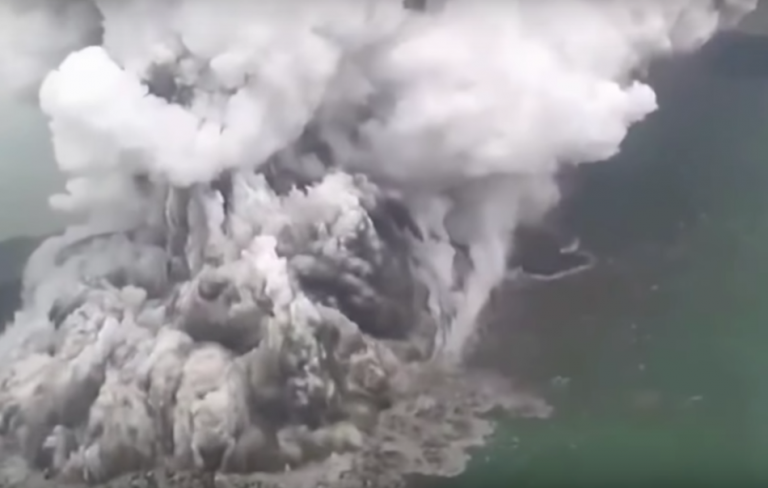 The eruption of Anak Kratatau on December 23, 2018. (Image: Screenshot via YouTube)

The tsunami that struck Indonesia on December 23, 2018, has claimed around 430 lives and left thousands injured. While the event has raised concerns over how to prepare for such natural disasters, the volcano that caused the tsunami is said to have shrunk as a result of the explosion.

The tsunami in Indonesia

Being located in the “Ring of Fire” region that is home to about 127 active volcanoes, Indonesia experiences tsunamis quite frequently. On December 22, 2018, the eruption of Krakatoa caused undersea landslides. This triggered a tsunami that hit the Sunda Strait, causing widespread havoc on the islands of Java and Sumatra.

“I was on the beach. I was alone, my family was sleeping in a room. I was trying to photograph the erupting Krakatau volcano. Earlier in the evening, there was quite a heavy eruption activity. But just prior to the waves hitting the beach, there was no activity at all. It was just dark out there. And suddenly I saw this wave coming, and I had to run… We and other people at the hotel went straight to the forest (on higher ground) next to the hotel,” Oystein Lund Andersen, a Norwegian volcano photographer who was on the Anyer Beach in West Java when the tsunami struck, said to the BBC.

Indonesia is still recovering from the catastrophic event, treating the injured and providing shelter and food to thousands of homeless people. However, what worries scientists is the fact that the eruption did not generate any significant seismic signals. As a consequence, Indonesia’s geophysical agency declared that there was no risk of a tsunami. This oversight in detection failed to alert and caused the deaths of hundreds of people.

Generally, tsunamis are triggered by an earthquake. But in this instance, it was an undersea volcanic eruption that caused the tsunami. The head of the International Research Institute of Disaster in Japan also agreed that their warning systems would have failed to generate any signal in similar circumstances.

Several geology experts have been landing in Indonesia to study the situation so as to develop an effective mechanism that would help authorities know about such eruptions and tsunamis beforehand.

“Indonesia has demonstrated to the rest of the world the huge variety of sources that have the potential to cause tsunamis. More research is needed to understand those less-expected events,” Stephen Hicks, a seismologist at the University of Southampton, said to Channel News Asia.

The eruption has massively altered the size of the Krakatoa volcano. According to a report by the country’s Center of Volcanology and Geological Hazard Mitigation, Krakatoa is currently only 110 meters above sea level. Prior to the explosion, it was 338 meters above sea level, indicating that Krakatoa has essentially lost two-thirds of its height.

Since the tremors continue, the alert level has been maintained at its highest — Level 3. Over 50 percent of the population from the Sebuku and Sebesi islands in Sunda Strait have been evacuated. More than 7,200 people are injured, over 43,300 people have been displaced, and 29 people remain missing.