The Mystery of Oppenheimer, the Bhagavad Gita, and the Nuclear Bomb 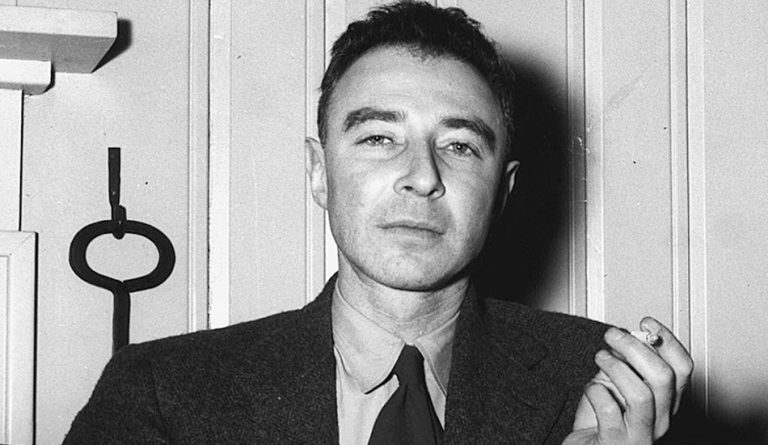 When Pearl Harbor was attacked by Japan during the Second World War, the U.S. administration wanted retribution. It set out to create the most powerful weapon known to humanity, the nuclear bomb. The man who was tasked with its creation, Dr. Julius Robert Oppenheimer, was not just a theoretical physicist, but he was also deeply interested in philosophy. He is famous in mythological circles because of his statement about the Bhagavad Gita, the Hindu holy book, which he said described the first detonation of a nuclear weapon.

The Trinity test quote by Oppenheimer

“We knew the world would not be the same. A few people laughed, a few people cried. Most people were silent. I remembered the line from the Hindu scripture, the Bhagavad-Gita. Vishnu is trying to persuade the Prince that he should do his duty, and, to impress him, takes on his multi-armed form and says, ‘Now I am become death, the destroyer of worlds.’ I suppose we all thought that, one way or another,” said Oppenheimer when recalling the Trinity test of the Manhattan Project:

The Bhagavad Gita is a talk between a human being, Arjuna, and an incarnation of God Vishnu, Lord Krishna. In the book, Arjuna is worried and depressed about having to fight his cousins in the war. Krishna quotes the statement to imply that everyone on the battlefield will eventually die in time, trying to make Arjuna understand that it is the duty of a soldier to fight the war and that death is an inevitable end result of all life.

Oppenheimer’s interest in the book started after he became a student of Sanskrit professor Arthur Ryder in 1933. Gaining proficiency in the Sanskrit language, he was able to read Gita in its purest form. It is said that after dropping the atomic bomb on Hiroshima, Oppenheimer visited U.S. President Truman and stated that he felt he had: “blood on my hands”. Truman apparently became angry at his statement and never wanted to see the physicist again in the office.

Some people suggest that the development of a nuclear weapon took a toll on Oppenheimer’s moral viewpoint and that the Gita consoled his mind by reminding him about the inevitability of death. However, the link between nuclear weaponry and Hindu mythology goes much deeper. The Bhagavad Gita is a part of a bigger book known as the Mahabharata. In the war following the incidents of the Gita, certain statements indicate the use of nuclear weapons.

In the Mahabharata, there are descriptions of various devastating weapons. One that stands out is the ‘Brahmastra’ a weapon said to be so powerful that there was no way to counter it once launched.

Upon striking the target, the Brahmastra was said to produce “an incandescent column of smoke and flame as bright as 10,000 suns that rose in all its splendor. After, corpses were so burned as to be unrecognizable. Their hair and nails fell out; pottery broke without any apparent cause, and the birds turned white… After a few hours, all foodstuffs were infected. Any target hit by the Brahmastra would be utterly destroyed; the land would become barren and lifeless, rainfall would cease, and infertility in humans and animals would follow for eons of time,” according to Gaia.

In the famed Indus Valley sites of Mohenjo Daro and Harappa, a researcher discovered that all objects were fused and glassified around a 50-yard radius at the site. Skeletons found at the site had radiation levels 50 times the normal values. Both discoveries triggered speculation that some sort of nuclear device must have been used in ancient times.