Xi Reminds of ‘Ancient Ties’ Between India and China 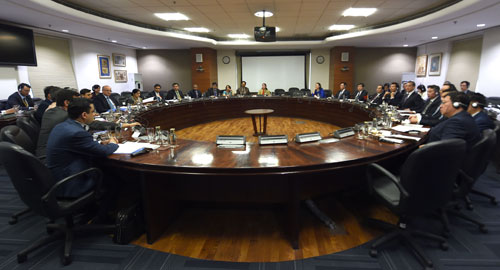 The first meeting of 'High-Level Mechanism on Cultural and People-to-People Exchanges’ held in New Delhi on December 21, 2018 saw the foreign ministers of India and China share a 10-point program to strengthen the ties between two nations. (Image: via Indian Ministry of External Affairs)

The first meeting of the “High-Level Mechanism on Cultural and People-to-People Exchanges”  held in New Delhi on December 21, 2018 saw the foreign ministers from India and China share a 10-point program to strengthen ties between the two nations. Meanwhile, Chinese President Xi Jinping remarked that he admired the deep civilizational ties both nations have had since ancient times. Xi made the statement while congratulating countries on conducting the first high-level cultural meeting.

Forging ties between India and China

The president stated that he hoped to see both India and China use the people-to-people exchange mechanism to develop solid bilateral relations. The foreign ministers of the two nations agreed to Xi’s call for deeper ties. Indian Foreign Minister Sushma Swaraj and Chinese Foreign Minister Wang Yi also identified 10 key areas to build up bilateral cooperation.

“Our leaders have great expectations from cultural exchanges and people-to-people ties… We will leverage our respective strengths in various sectors… China has just celebrated the 40th anniversary of reforms and opening up. India, our most important neighbour, is also opening up and is developing fast,” Wang Yi said in a statement (The Economic Times).

The meeting also saw Sushma Swaraj reiterate India’s stance that a stable boundary was prerequisite for stable relations between India and China.

Issues between India and China

Relations between India and China are strained by several issues, with the primary one being the debate about borders. 2017 saw the armies of both countries stage a 73-day standoff at Doklam border. China tried to march into the region, claiming it as their land. India gave an equally befitting reply by blocking out the Chinese aggression and not ceding an inch of land.

The public in India also called for a boycott of Chinese goods. Sensing that the Doklam standoff could worsen trade relations between the two countries, China eventually pulled back from the region. In 2018, both nations resumed joint military drills to heel the bad taste left after the Doklam incident.

Another thorn in the relation between the two countries has been China’s Belt and Road Initiative (BRI). The China-Pakistan Economic Corridor (CPEC) passes through the sensitive Kashmir region, a very important area for India. The country is engaged in military conflict with Pakistan over the right to claim Kashmir. India fears that CPEC would increase Chinese influence in Kashmir and disrupt India’s strong grip over the region.

China’s support for Pakistan has also been troublesome for India. When New Delhi tried to get a Pakistani terror chief, Masood Azhar, declared as a global terrorist by the UN, China interfered and blocked the proposal. China also opposed India’s efforts to become a member of the Nuclear Suppliers Group.

With such troubling security issues and mistrust, it remains to be seen whether the cultural exchange programs initiated by the two countries will really improve their relations.