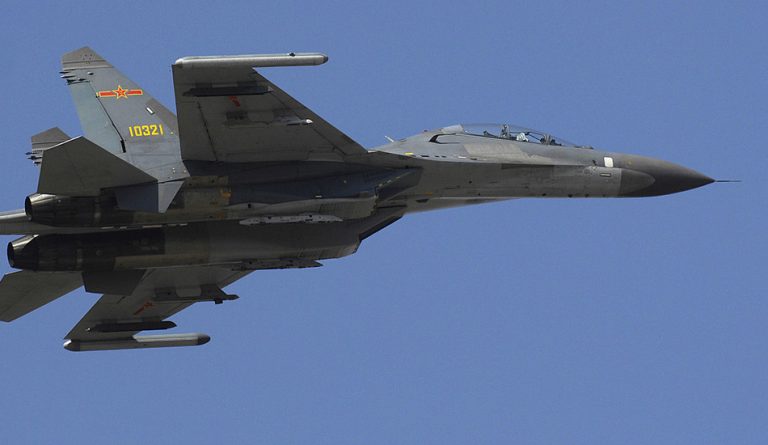 A senior White House official noted there was a growing concern regarding China’s saber-rattling. (Image: via Wikimedia Commons)

The Chinese airplanes had entered KADIZ around 10 a.m., spending about one and a half hours in the region before flying away. When the South Korean military came to know about the Chinese intrusion, it prepared the F-15K and KF-16 jets to standby to counter the Chinese aircraft in case of any aggression.

“Our fighter planes took normal tactical measures, identifying the models of the Chinese planes and flying aerial surveillance until they left,” said a South Korean statement (Reuters). The Chinese reportedly had two fighter jets, two bombers, and one reconnaissance plane.

South Korea had recently deployed the Terminal High-Altitude Air Defense (THAAD), a move that angered China since the system could effectively look into Chinese territory and break through its security. The airspace intrusion might be one way of Beijing “showing its might” against Korea.

Chinese incursions into South Korean airspace have rapidly grown over the past years. While in 2016 there were 60 reported intrusions, the figure has jumped to 110 intrusions in 2018 as of September. Increasing cooperation between the U.S., South Korea, and Japan is believed to have made Beijing paranoid about its hold on the region.

“China’s moves are part of its grand strategy to exert greater influence, presence, and pressure in the Indo-Pacific region… Possible failure of U.S.-North Korea negotiations would be in [Beijing’s] calculations,”  Ryo Hinata-Yamaguchi, a visiting professor at Pusan National University in South Korea, said to the South China Morning Post.

China is deploying more military assets in the South China Sea in a bid to get complete control over the area. Three reefs in the region have been transformed into islands by Beijing through reclamation. Missiles and planes have been placed on the reefs.

“The fact that by the end of last year (2017), we suddenly had effectively operational air and naval bases should be concerning. What should be more concerning is that 2018 has now become phase 3, which is deployments… Over the first 6 months of the year, certainly there was a steady, pretty rapid increase in the level of Chinese military deployments that was well covered in the press here and in Washington,” Gregory Poling, director of a Washington-based think tank, said in a statement (Rappler).

Beijing is also becoming aggressive in its plan to annex Taiwan, an island nation that rejects China’s claim over it and chooses to remain an independent democracy. Since Taiwan is closely supported by the U.S., both economically and militarily, its independence is seen by China as a security threat. Political experts believe that any move by the U.S. and its allies in the South China Sea might be taken as enough “provocation” by the Chinese military so as to warrant conquering Taiwan.

“It would boost the speed of our unification of Taiwan… Let’s just be prepared and wait. Once a strategic opportunity emerges, we should be ready to take over Taiwan,” Dai Xu, Chinese Air Force colonel, said in a statement (News.Com.Au).

In late November, the U.S. sent two Navy ships through the Taiwan Strait despite strong Chinese opposition. America also increased military trade with Taiwan, which also seems to have ticked off Beijing.