A Story of Filial Piety 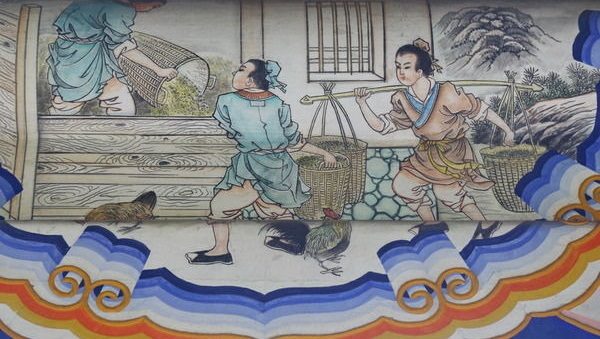 The rich man's son took over the work of managing the warehouse, and he was very cautious in his style of work. The image is of the granary in Fang Liangcai's work entitled 'Ploughing and Weaving.' (Image: via National Palace Museum, Taiwan)

Filial piety is one of the main virtues of Chinese people. Zhang Xiaoji was a scholar of Xuchang in the Song Dynasty. When he grew up, a rich man in the village acknowledged his talent and offered his daughter in marriage to Zhang. This rich man had only one son, who was spoiled and wandered around wasting money. One day, the rich man saw him do nothing useful all day and behaving very badly. In anger, he drove his son out of the house and broke his father-son relationship with him.

After the rich boy was driven out of the house, he became a beggar in the village. Since he could not support himself, he had to beg for a living. One day, when he was begging, he happened to run into Zhang Xiaoji. He did not recognize Xiaoji, but Xiaoji recognized him. If it were a normal person, Xiaoji could have pretended not to know him and left quietly But Xiaoji did not do that.

When Xiaoji saw the change, he was a little surprised. He asked the rich man’s son again: “Can you manage the warehouse?” The son said: “I am very fortunate that you let me take care of the garden. Now you want me to manage the warehouse — that would be great.” So the son of this rich man took over the work of managing the warehouse, and he was very cautious in his work. He was very disciplined and did not have any faults.

After carefully observing the situation for a period of time, Xiaoji knew that the rich man’s son had been rehabilitated and no longer had the problems of eating, drinking, and playing. He returned his father-in-law’s property to the son.