The Secrets Surrounding the Bucegi Mountains of Romania 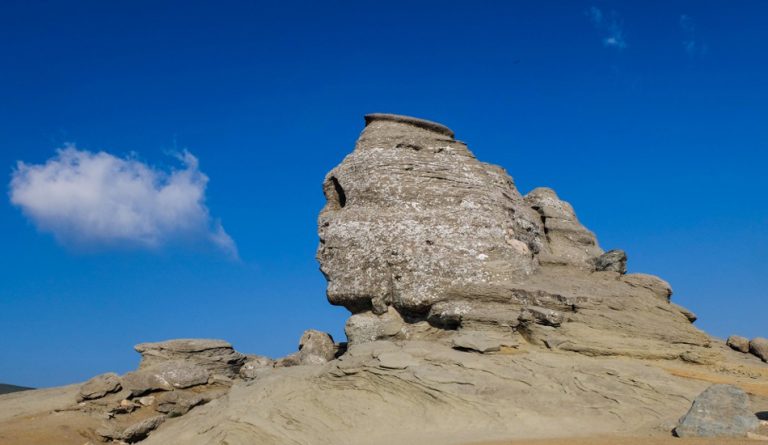 The Bucegi Plateau is mostly known for one of the most impressive natural monuments in Romania, the Sphinx. (Image: via romaniatourstore.com)

The Bucegi Mountains of Romania are a picturesque area filled with stunning peaks, amazing scenery, and rich wildlife. Declared a national park in 1935 by the Romanian government, it has been listed as a protected region. However, what makes the mountains a fascination for many is not their beauty, but the mysteries surrounding the region that may indicate the historical existence of an advanced, alien civilization on Earth.

Beneath the Sphinx in the Bucegi Mountains

The most popular site in the region is the Romanian Sphinx, a series of rock formations on the Bucegi Plateau that look similar to the famous Sphinx in Egypt. According to geologists, these rock formations are natural occurrences that have been formed due to the rocks being exposed to wind and water for thousands of years.

However, some claim that the image of the Sphinx is so clear and definite that it cannot be a “natural” formation and that some higher intelligence created it, specifically, an alien intelligence.  The theory became popular after a 2009 book, Transylvanian Sunrise, was published.

According to the book, the Pentagon discovered an empty space beneath the Sphinx in 2002. The empty space was later found to have no correspondence with the outside. It seemed as if it was carved entirely from the inside by highly intelligent beings. The satellite scan also revealed that the Sphinx mountain had two major barriers that were made of artificial energy.

The first barrier seemed like an energetic wall that blocked access to the tunnel leading to the empty space. The second one was shaped like a dome and located opposite to the tunnel. A secret team apparently went through the tunnel in 2003 and arrived at a giant auditorium that housed a projection room that was protected by an energetic shield. And inside the projection room, the team was exposed to a handful of stunning secrets.

History of the human race

The projection room contained information on a wide range of subjects like cosmology, physics, biology, genetics, religion, architecture, astronomy, and so on.

A device inside the room projected a series of images that displayed the history of mankind, much to the shock of the team members. For instance, the projections confirmed the historical existence of the famed continents of Atlantis and Lemuria. The idea that dinosaurs went extinct 65 million years was shown to be wrong. Darwin’s theory of evolution was displayed as completely false.

But what caught the attention of the team was the wealth of biblical information the projection images revealed. The members are said to have seen the true origin of the human race and the events surrounding the Great Flood. The existence of Jesus and his crucifixion was also confirmed. Several people from different historical time periods are said to have come to witness the crucifixion. The visitors were wearing similar clothing, but had their faces covered.

The explorers supposedly also discovered three long tunnels inside the space that were estimated to be thousands of miles in length, covering important regions of the Earth. The first tunnel is said to lead directly to Egypt, while the second tunnel is believed to end somewhere in Tibet. The most interesting one is the third tunnel that went downwards to extreme depths inside the Earth. Some people believe that this specific tunnel leads to a hidden underworld. It is speculated that several teams were sent to explore the three tunnels. However, what the teams discovered has not been made public and at this point is not verifiable.