Three-Fingered Mummies Discovered in Peru Are Allegedly Not Human 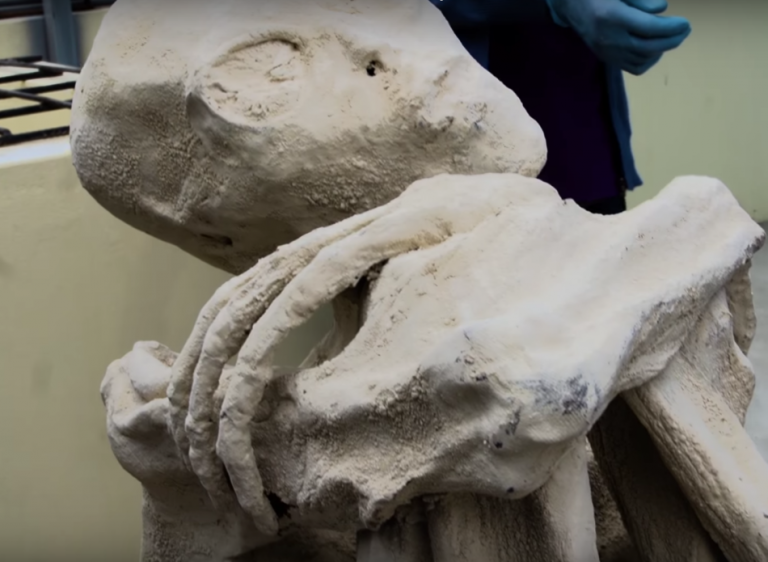 The discovery of three-fingered mummies in Peru last year came as a sensational find. (Image: Screenshot via YouTube)

The discovery of three-fingered mummies in Peru last year came as a sensational find. At first look, it was clear that the mummies were not human. Now, a team of scientists from Russia has alleged that the mummies are actually humanoid aliens.

“Each of the little mummies has two arms, two legs, a head, a pair of eyes and a mouth. Tomographic scans reveal their skeletons. The tissue has biological nature and their chemical composition indicates that they are humans. Their DNA features 23 pairs of chromosomes, just like we have. All the four of them are males, each with a Y-chromosome. They appear human, but they are not. Their anatomic structure is different,” Konstantin Korotkov, a professor at the Russian National Research University professor, said to Sputnik News.

The three-fingered mummies were discovered from a tomb very near to the Nazca lines in southern Peru. The tomb has been dated to have been created around the 5th century B.C. The rib structure of the three-fingered mummy is said to be very different from a regular human being. The rib cage contains a handful of semicircular ribs and its upper part is keel-shaped.

“There are lots of details that indicate that the bodies are real. To recreate a skull with these characteristics is a very difficult task,” Dr. Edson Vivanco, a skeletal expert who examined the mummy, said in a statement (News.Com.Au).

The white powder that was used to mummify the body was found to be cadmium chloride. Being antibacterial in nature, the chemical played a huge role in preserving the bodies. The scientists have reportedly begun work on cracking their DNA. In addition, they are also checking whether the shape of the positions of the chromosomes coincides with human beings.

The discovery has been alleged to be a hoax by many people due to several reasons. For one, the respectability of the source is a major problem. The lead researcher, Konstantin Korotkov, had once claimed that he had photographed a soul leaving the human body. However, the photos were later traced to a heat-map of a human body, before, during, and after entering a sauna. As such, there is little trust in Korotkov’s statements that support the alien nature of the mummies.

A group of researchers from Peru has also issued a statement, claiming that the three-fingered mummies “have been deliberately distorted just enough to justify calling them “alien.” This would involve breaking and manipulating the hands and feet — and covering up the evidence with some form of whitewash,” according to News.Com.Au.

The elongated fingers and abnormal skeletal conditions can also be explained by the fact that bodily deformation has been practiced in small pockets of various cultures. For instance, Chinese women used to have their feet broken and bent in ancient times. Similarly, some African cultures still have a practice of elongated necks. In Peru itself, mummies have been discovered that have an elongated skull, which archaeologists have proven is the result of deforming children’s bodies during their development.

Another area of concern is that the news was initially spread by the Russian media. News agency Mir 24 was the first to broadcast the story, followed by Sputnik and well-known Russian propaganda channel RT. Later on, Western media seemed to have picked up the story, sensationalizing it for views rather than checking facts of the matter firsthand.