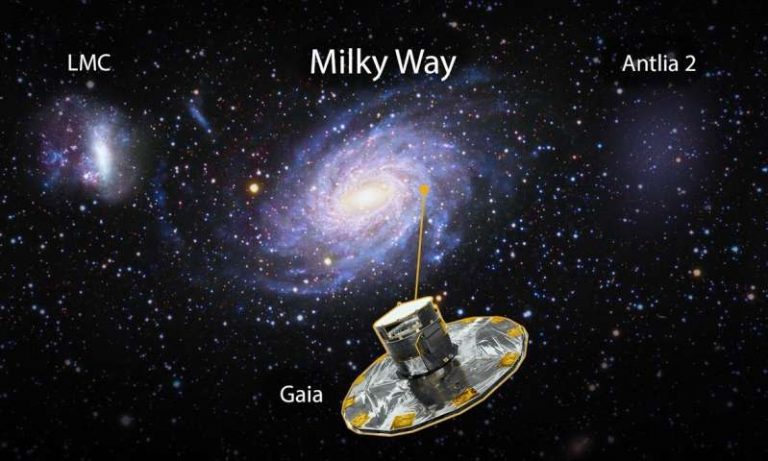 Antlia 2 is slightly larger than the Large Magellanic Cloud and is almost 1/3 of the Milky Way itself. (Image: V. Belokurov and A. Smith (Cambridge, UK and CCA, New York, US) based on the images by Marcus and Gail Davies and Robert Gendler)

An international team of astronomers, including from the University of Cambridge, discovered the massive object when trawling through data from the European Space Agency’s Gaia satellite. The object, named Antlia 2 (or Ant 2), has avoided detection until now thanks to its extremely low density as well as a perfectly chosen hiding place, behind the shroud of the Milky Way’s disc. The researchers have published their results online.

Ant 2 is known as a dwarf galaxy. As structures emerged in the early Universe, dwarfs were the first galaxies to form, and so most of their stars are old, low-mass and metal-poor. But compared to the other known dwarf satellites of our Galaxy, Ant 2 is immense: it is as big as the Large Magellanic Cloud (LMC), and a third the size of the Milky Way itself.

What makes Ant 2 even more unusual is how little light it gives out. Compared to the LMC, another satellite of the Milky Way, Ant 2 is 10,000 times fainter. In other words, it is either far too large for its luminosity or far too dim for its size. Gabriel Torrealba, the paper’s lead author, said:

“This is a ghost of a galaxy.

“Objects as diffuse as Ant 2 have simply not been seen before. Our discovery was only possible thanks to the quality of the Gaia data.”

The ESA’s Gaia mission has produced the richest star catalog to date, including high-precision measurements of nearly 1.7 billion stars and revealing previously unseen details of our home Galaxy. Earlier this year, Gaia’s second data release made new details of stars in the Milky Way available to scientists worldwide.

The researchers behind the current study — from Taiwan, the UK, the U.S., Australia, and Germany — searched the new Gaia data for Milky Way satellites by using RR Lyrae stars. These stars are old and metal-poor, typical of those found in a dwarf galaxy.

RR Lyrae change their brightness with a period of half a day and can be located thanks to these well-defined pulses. Co-author Vasily Belokurov, from Cambridge’s Institute of Astronomy, said:

“RR Lyrae had been found in every known dwarf satellite, so when we found a group of them sitting above the Galactic disc, we weren’t totally surprised.

“But when we looked closer at their location on the sky, it turned out we found something new, as no previously identified object came up in any of the databases we searched through.”

The team contacted colleagues at the Anglo-Australian Telescope (AAT) in Australia, but when they checked the coordinates for Ant 2, they realized they had a limited window of opportunity to get follow-up data. They were able to measure the spectra of more than 100 red giant stars just before the Earth’s motion around the Sun rendered Ant 2 unobservable for months.

The spectra enabled the team to confirm that the ghostly object they spotted was real: All the stars were moving together. Ant 2 never comes too close to the Milky Way, always staying at least 40 kiloparsecs (about 130,000 light-years) away. The researchers were also able to obtain the galaxy’s mass, which was much lower than expected for an object of its size.

“The simplest explanation of why Ant 2 appears to have so little mass today is that it is being taken apart by the Galactic tides of the Milky Way.

“What remains unexplained, however, is the object’s giant size. Normally, as galaxies lose mass to the Milky Way’s tides, they shrink, not grow.”

If it is impossible to puff the dwarf up by removing matter from it, then Ant 2 had to have been born huge. The team has yet to figure out the exact process that made Ant 2 so extended. While objects of this size and luminosity have not been predicted by current models of galaxy formation, recently it has been speculated that some dwarfs could be inflated by vigorous star formation.

Stellar winds and supernova explosions would push away the unused gas, weakening the gravity that binds the galaxy and allowing the dark matter to drift outward as well. Co-author Jason Sanders, also from Cambridge, said:

“Even if star formation could re-shape the dark matter distribution in Ant 2 as it was put together, it must have acted with unprecedented efficiency.”

Alternatively, Ant 2’s low density could mean that a modification to the dark matter properties is needed. The currently favored theory predicts dark matter to pack tightly in the centers of galaxies. Given how fluffy the new dwarf appears to be, a dark matter particle that is less keen to cluster may be required. Co-author Matthew Walker, also from Carnegie Mellon University, said:

“Compared to the rest of the 60 or so Milky Way satellites, Ant 2 is an oddball.

“We are wondering whether this galaxy is just the tip of an iceberg, and the Milky Way is surrounded by a large population of nearly invisible dwarfs similar to this one.”

The gap between Ant 2 and the rest of the Galactic dwarfs is so wide that this may well be an indication that some important physics is missing in the models of dwarf galaxy formation. Solving the Ant 2 puzzle may help researchers understand how the first structures in the early Universe emerged.

Finding more objects like Ant 2 will show just how common such ghostly galaxies are, and the team is busy looking for other similar galaxies in the Gaia data.