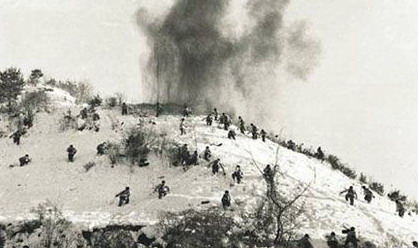 Chinese forces on the attack. (Image: via britannica.com)

As cold as it may be, the weather reminds us that it is nothing compared to what Americans endured during the Battle of Chosin Reservoir during the Korean War. That was back in 1950 when Chinese forces attacked the day after Thanksgiving in what became one of the most decisive battles of the war.

This was the “Frozen Chosin.” At the time, the American and United Nations (UN) forces in Korea were thinking the war might be over by Christmas. Then, the Chinese Communists intervened by sending eight divisions of soldiers into the Korean peninsula. In so doing, Beijing overnight changed the entire war.

US forces surrounded at Chosin Reservoir

Suddenly, badly outnumbered U.S. forces near the Chosin Reservoir found themselves surrounded. They decided to fight their way 78 miles through enemy lines.

By breaking out of the trap and inflicting heavy casualties on the enemy, the U.S. First Marine Division denied the Chinese communists their victory and transformed a tactical retreat into an offensive. Five of the seven Chinese divisions the Marines engaged were destroyed completely, never again to appear in the Korean War.

In those terrible days, the weather and terrain were as hostile as the Chinese communist troops. Much of the fighting took place in temperatures 20 degrees below zero. Food rations froze; truck batteries conked out; weapons wouldn’t fire; men were lost to frostbite. And yet they prevailed.

It’s a good message for a time when we give thanks around the holidays. Because Americans and South Koreans owe special gratitude to the U.S. Marines who spent their “holidays” fighting in perhaps the most brutal conditions any fighting man has ever faced.

And at a time when many wonder if the sacrifices of their troops around the world make any difference, it’s worth posing that question to the 50 million citizens who live in a free and prosperous South Korea — which would not have been possible without the war the U.S. fought there.