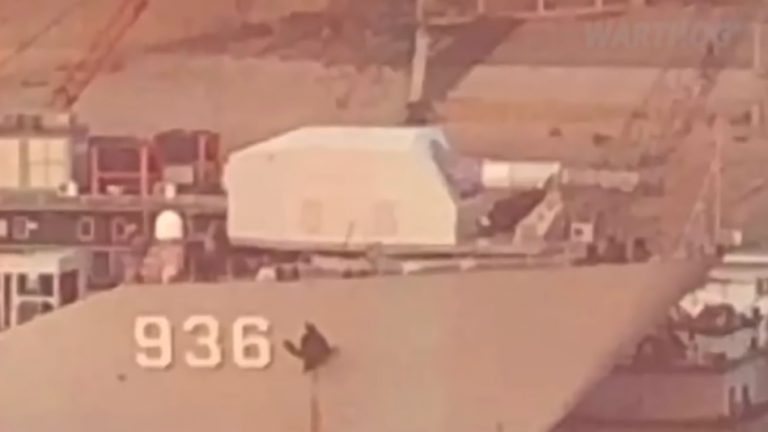 China seems to have developed the world’s first naval railgun with the power to fire projectiles at seven times the speed of sound. (Image: Screenshot via YouTube)

China seems to have developed the world’s first naval railgun with the power to fire projectiles at seven times the speed of sound. Currently in testing, the railgun could give China an incredible advantage at sea. Military experts believe the development will significantly boost China’s confidence in its own power and might even make them more aggressive in the South China Sea, threatening peace in the region.

Rumors about China’s new weapon started circulating after a Weibo user posted an image of a Chinese naval warship carrying what appeared to be an electromagnetic railgun. Media reports suggest that the device has been on the radar of U.S. agencies for quite some time. In fact, American intelligence services believe the Chinese railgun to be capable of firing rounds that can travel at 1.6 miles per second, which comes to 5,700 miles per hour. This is higher than Mach 7.

Such high speeds would make shells fired from the railgun almost impossible to destroy or evade by enemy ships. The weapon can also be armed with guided shells to home in on targets and avoid defensive systems. On the flipside, the reliance on electromagnetic force means that the weapon needs to be fed with massive amounts of electricity. As such, the ship needs to house numerous generators, batteries, and capacitors.

The Chinese military used an amphibious assault ship to test its new weapon. “The Type 072II Yuting-class tank landing ship Haiyangshan has been converted from its previous role to become an experimental testbed. This is likely because its open cargo bay is capable of holding the extensive array of batteries and generators necessary to power the next-generation weapon. While still no warship, the cannon it carries is a fearsome sign of things to come,” according to News.Com.Au.

A U.S. intelligence report released last year had predicted the Chinese would have the naval railgun ready by 2025. But given that Beijing already has the weapon in testing phase, a railgun-equipped Chinese naval ship might start patrolling the seas earlier than anticipated.

The electromagnetic railgun is one of the several military technologies being developed by Beijing. The success of such experiments will only embolden the regime to strongly assert its might in the South China Sea and bully nations like Taiwan to accept Chinese dominance.

“So the 2020s presents a real risk of a U.S.-China military clash, seeing as Xi Jinping has said he will not tolerate Taiwanese independence, and they’re not willing to let go of the South China Sea — which is fundamentally at odds with what the U.S. wants,” Dr. Malcolm Davis, a senior analyst at the Australian Strategic Policy Institute, said to ABC News.

As far as the railgun is concerned, the Chinese have one advantage over the U.S. in that it is only starting to build up its naval force. As such, Beijing can easily integrate railguns and other new technologies during the development of new warships. On the other hand, the U.S. will have to gut its existing warships and do extensive modifications to incorporate new weapons like the railgun.

Though the U.S. military already has a railgun project active, it is has been more focused on developing better long-range projectiles. However, with China already testing the technology, security experts feel that the U.S. might also speed up its railgun project.