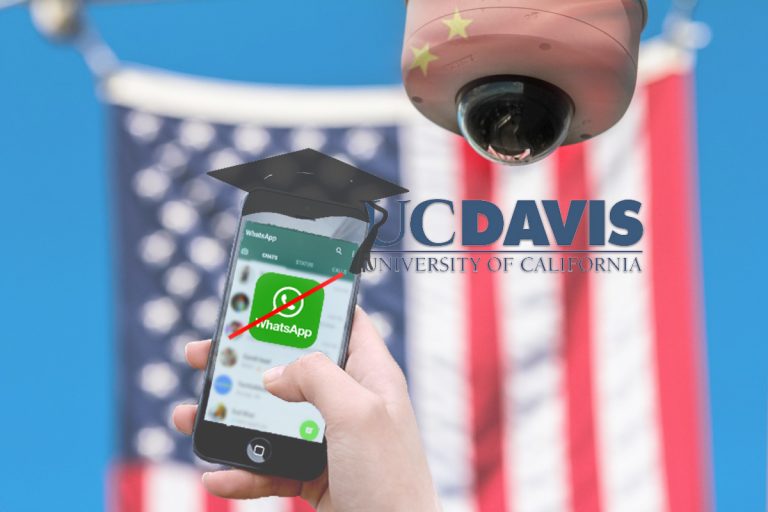 'In most cases, U.S. citizens only become aware of the exit ban when they attempt to depart China, and there is no method to find out how long the ban may continue.' (Image: Hermann Rohr via Nspirement)

The University of California, Davis, has issued an email to some of its students, warning them not to use social media apps like WhatsApp and WeChat while traveling to China. The students have also been asked not to make any “unfavorable political statements” during their stay.

Warning to students not to use WhatsApp and WeChat

“While the use of WhatsApp [sic], WeChat and like messaging apps is legal in China, we have seen in the latest espionage charge of a US citizen in Russia where the use of WhatsApp [sic] has been cited in his espionage charges. Our concern here is the possibility China could use this condition similarly against Western travelers to levy charges or as an excuse to deny departure. We recommend not using these messaging apps at this time,” the email stated (South China Morning Post).

The email also advised students not to sign anything or give up their passports unless forced to do so. In case they are detained for some time, the students must contact the U.S. Embassy and provide details of the detainment.

When talking with Chinese authorities, caution has been advised against revealing any information that might be distorted to facilitate an arrest or deny departure.

A part of the warning sent by the university

The message was sent by Gary Leonard, University of California Office of the President’s director of liability and property programmes. It is believed that the worsening U.S.-China relationship and the updated travel advisory issued by the U.S. State Department earlier this month contributed to the warning.

China has been detaining foreign nationals under their “exit ban” policy. After Canada arrested Huawei CFO Meng Wanzhou because of a U.S. court order and an extradition agreement, Beijing went on to detain several Canadian nationals in retaliation. Several US citizens have also been prevented from traveling out of China in the past year. This forced the U.S. to update its travel advisory regarding China.

“In most cases, U.S. citizens only become aware of the exit ban when they attempt to depart China, and there is no method to find out how long the ban may continue. U.S. citizens under exit bans have been harassed and threatened,” the warning stated (CNBC).

A detainment that made international headlines of late was that of Victor and Cynthia Liu. Both U.S. nationals were arrested when they arrived in China because of a corruption investigation involving their father. They have been stuck in China since June last year, with Beijing not in the mood to change its stand.

“Out of concern for the security of these young Americans, we will refrain from public comment as we continue our efforts to constructively and directly engage the Chinese government to allow them to return home,” David Pressman, who is representing the Liu family, said to South China Morning Post.

The travel advisory also warned that U.S. nationals of Chinese descent might face increased harassment and scrutiny from the authorities.

Beijing might even prevent the U.S. Embassy from providing consular services. China does not recognize dual nationality. In the eyes of Beijing, anyone born in China comes under the control of the Communist Party.

Despite the updated warning, China remains classified as a “Level 2” country, the same category it was assigned last year. However, Hong Kong is ranked better at “Level 1.”