The Indian Businessman Who Married Off 3,000 Girls 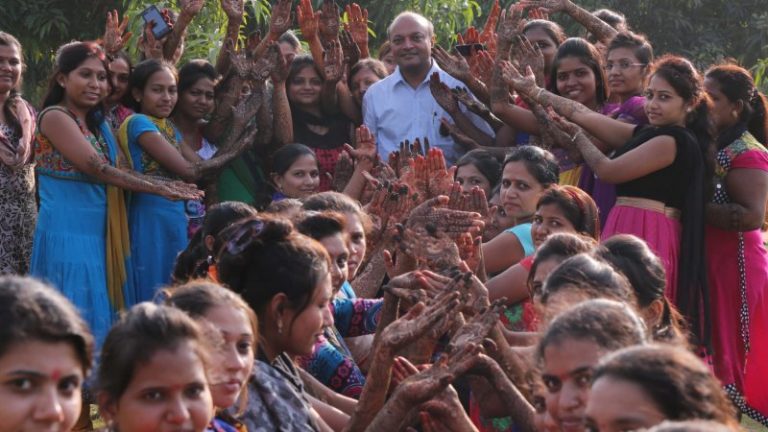 Mahesh with the brides at one of his mass weddings. (Image: via Sydney Morning Herald)

Mahesh Savani from the state of Gujarat is a very successful Indian businessman. But people who know him admire the astute entrepreneur for entirely different reasons. He holds an annual ceremony where he marries off about 250 or more girls whose fathers have passed away, paying for all the wedding expenses. Thousands of women have benefited from Mahesh’s efforts.

Mahesh’s decision to support marriages of fatherless/orphaned women comes from a tragedy faced by the family of one of his former workers. “I was very shocked when one of my employees died just 12 days before he could marry off his two daughters. It was very difficult for the family to arrange for marriage… So I decided that I would become their foster father and marry them off. This is how it began,” he said to International Business Times.

Initially, Mahesh arranged the weddings as individual events. But after 47 weddings, he realized that this was time-consuming. So the businessman increased productivity and started conducting mass weddings from 2010. He has been holding a mass marriage ceremony every single year in December at the grounds of the PP Savani School (that he owns).

To ensure that he does not get exploited by unscrupulous women, Mahesh insists the girls submit their father’s death certificates. Once that condition is met, he takes full responsibility for the girl’s wedding irrespective of caste or religion.

“Now, there are thousands of forms and we have to choose… We make sure those without parents get on the list, then we give them a catalogue of make-up and clothes to choose from, and I pay for everything,” Mahesh said to The Weekend Leader.

The Indian businessman pays for all the wedding expenses

A wedding of a single girl costs approximately INR 400,000 (US$5,700). In addition to clothes and gold jewelry, Mahesh also gives every girl the basic necessities of running a household, including items like cutlery, crockery, electric gadgets, cooking utensils, etc. And the women are thankful to Mahesh for helping out with their lives.

“Once we become his daughters, we are daughters for life. At every festival when a father is meant to go to his married daughter’s house with gifts, Mahesh Papa goes to as many homes as he can. He treats his responsibility as one that’s forever, not something that ends when the wedding is over,” Vishva Vamja, whose marriage was funded by Mahesh, said to The Sydney Morning Herald.

Up to now, Mahesh has sponsored the weddings of about 3,000 girls. He also pays for the education of 3,300 fatherless girls in over 260 schools in the city of Surat. Mahesh ensures that the girls at least study till the 12th grade.

Mahesh was born into a well-to-do family. His father was initially just a regular employee of a diamond manufacturing company. However, he saved up enough money to set up a successful diamond business that Mahesh and his brothers later inherited.

When Mahesh joined his father’s business in 1990, the operation used to churn out 35,000 diamond pieces per month. But with persistent effort, the number skyrocketed to 300,000 per month. Soon, the business was extremely profitable and had a good cash flow. However, Mahesh was caught up in a few cases against his diamond import business in 2003.

Over the next four years, he went through tough times that ended with him shutting down the diamond operation and setting up a realty business in 2008. His venture in real estate became a success and earned him millions. Almost 50 years old, Mahesh has two sons, one of whom has already joined the business after completing his MBA from London.