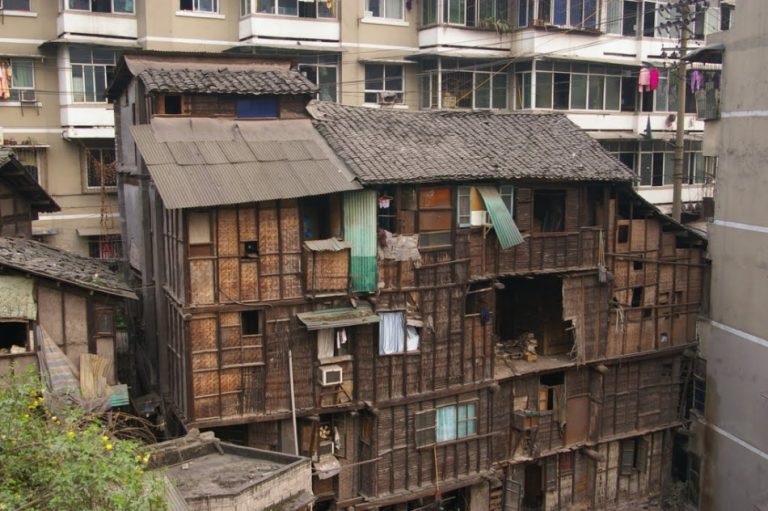 Struggling with inequality so much that it’s now a trend among educated youth to call themselves ‘dirt-poor’ and ‘ugly’ because of the harsh lives they are forced to live in China. (Image: Zhiqiang via Wikimedia Commons)

According to the Chinese Communist Party (CCP), China is economically growing, income and wealth inequalities are narrowing, and the citizens all live satisfactory lives. But one look beyond the Party propaganda reveals a society that is struggling with inequality so much that it’s now a trend among educated Chinese youth to call themselves “dirt-poor” and “ugly” because of the harsh lives they are forced to live.

The trend started in social media where the Chinese character “qiou” became an instant hit. Qiou is made up of three characters that denote dirt (tu), poor (qiong), and ugly (chou).  The popularity of the word surged after a Chinese news outlet started promoting it. In fact, many now consider it the “unofficial word of 2018.”

Social scientists see the word’s popularity among Chinese youth as an indication of the hopelessness many of them feel. Some also perceive it as kind of defeatist in the sense that the youth who have adopted the word have given up on the expectations placed on them by society. Though the current crop of youth enjoys far more wealth than previous generations, attaining success has been difficult.

According to official figures, the unemployment rate is hovering only around 4 percent. But what statistics do not reveal is the fact that the Chinese youth who are employed face intense competition to retain their jobs. The spiraling living costs also add to the pressure. Most of them end up stuck with their current jobs, never achieving their dreams. The failure ends up crushing their souls, making many of them loners who pull back from society.

“I thought, I’m a human being, why don’t I live like one? I thought of my family. I thought of my future. My heart ached… and then I fell asleep… The next morning I woke up and started working like crazy to get promoted and make more money — and now I’m still just a low-level employee,” Wang Yaling, who identifies with the identity of qiou, said in a forum (Los Angeles Times).

Meanwhile, the CCP seems completely disconnected from the trend when it picked “fen” as the “official word of the year.” The word “fen” translates into hard work, something that Chinese youth are clearly tired of.

According to the International Monetary Fund (IMF), income inequality in China is growing rapidly, much faster than the United States. A report by Peking University shows that the top 1 percent of Chinese households account for over a third of the country’s wealth. In contrast, the bottom 25 percent only owns a dismal 2 percent of the wealth.

The condition is worsened by the fact that China has implemented a system that forces people to only utilize schools and other public services in the place they are born. As such, those from the countryside who migrate to big towns are never able to give children a proper education. This keeps the next generation stuck at the bottom.

With China currently engaged in a trade war with the U.S., individuals and businesses have become very pessimistic, which adds to the overall helplessness felt by Chinese youth. “People have started to reduce or even stop spending money because they don’t expect the economy will perform well… Companies and individuals are wary about the economy,” Ye Tan, an independent economist based in Shanghai, said to The Guardian.

For 2018, economists estimate China’s economic growth to be around 6.6 percent. This year, growth is expected to slow down to 6.3 percent. However, things could end up much worse depending on how the U.S.-China conflict turns out.