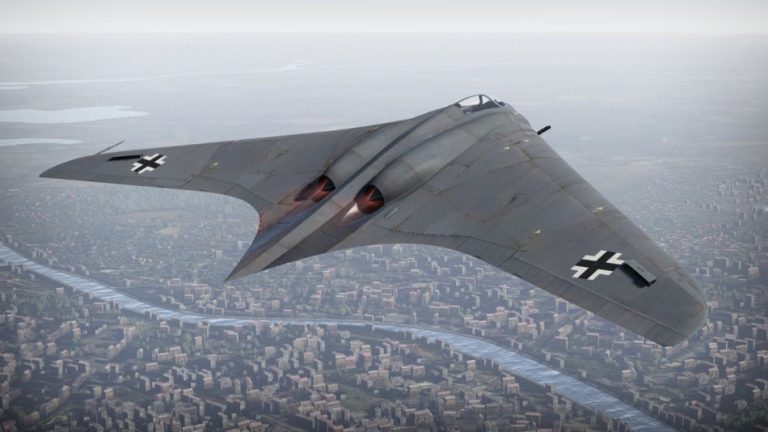 An artist representation of a Horten Ho 229 in flight. (Image: via Wikimedia Commons)

During World War II, allied aircraft pilots often reported having seen various UFOs in the skies. While some of them were dismissed as hallucinations, a few evoked enough interest from higher officers that a detailed investigation on the matter was ordered. It was later concluded that the UFOs could have been advanced German aircraft developed from Nazi UFO technologies. Even today, the Nazis are believed to have secretly researched many UFO-like technologies that were too advanced for their time. The famous “Nazi Bell” is one such object often linked with the Germans.

Was the Bell one of the Nazi UFO technologies?

The Bell is an alleged experiment that scientists from the Third Reich were conducting in a secret German facility called “The Giant.” Evidence for the project came from a former Nazi SS rank officer Jakob Sporrenberg during his trial at a Polish war crimes court. In his court affidavit, Jakob gave details of the Nazi Bell, claiming that several engineers and scientists associated with the project were killed to prevent details of the technology from leaking to the outside world.

The Bell was apparently the heart of the German space program and was seen as critical in the development of Earth-based UFO technologies. The device was so named because of its similarity with a church bell. It was approximately 12 to 15 feet high with a width of 12 feet. People who had knowledge of the object say that it was built using a hard, heavy metal. In addition, a lighter metal called “Leichtmetall,” thorium peroxide, and beryllium peroxide were used in its construction.

It was reportedly capable of sustained flight beyond the Earth’s orbit due to being powered by a liquid fuel dubbed “Serum 525.” The fuel had a reddish, velvety color, with a very gooey, dense texture. Some have speculated the liquid to be red mercury. Serum 525 was placed in large cylinders that spun at very high speeds. This is said to have created anti-gravity propulsion that made sustained flight possible.

Interestingly, it had an “effect zone” that stretched up to 660 feet around the craft. Inexplicable events happened within this zone, including the gelling and formation of blood, and the formation of crystals within animal tissue.

During the end of the Second World War, Nazis were involved in the development of some truly bizarre and mind-bending “miracle weapons.” Some of the aircraft were described to have been so ingenious that they could have given the Germans a victory if the war had not ended soon.

“I have seen enough of their designs and production plans to realize that if they had managed to prolong the war some months longer, we would have been confronted with a set of entirely new and deadly developments in air warfare,” Roy Fedden, a British aeronautical engineer who led the mission to examine German expertise at the end of World War II, said to the Daily Star.

Among the many Nazi research projects was the Horten Ho 229. The prototype aircraft was being designed to carry 1,000 kg bombs at a speed of 1,000 kilometers per hour over a distance of 1,000 kilometers. After the war, the U.S. military seized the last prototype. The famous B2 Stealth Bomber looks very similar to the Horten Ho 229 that was determined to also have a radar-evading design by Northrop Grumman, who tested the full-scale replica at its outdoor RCS test facility in California at electromagnetic frequencies equivalent to the allied radar systems of World War II.

However, the most mysterious of all Nazi aircraft projects was the famed Schauberger Repulsine engine. Nazi scientists tried to use the engine in an aircraft capable of vertical takeoff. Interestingly, the object looked very similar to a UFO.