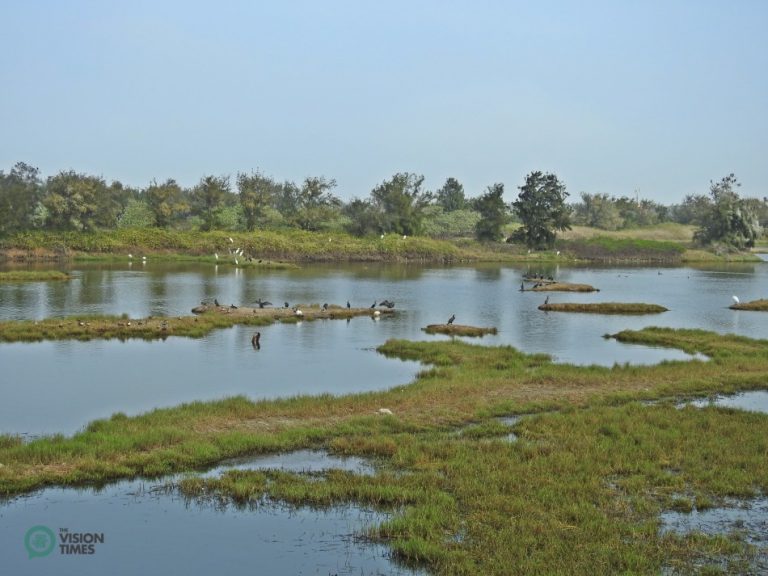 The Thousand Islands Lake in the Aogu Wetlands and Forest Park. (Image: Billy Shyu via Nspirement)

Situated on the south-side of Beigang Estuary (北港溪出海口) in southern Taiwan’s Chiayi County, and covering an area of 1,030 hectares, Aogu Wetland is the land reclaimed from the sea and reverted to a coastal wetland. It is a wildlife conservation sanctuary.

In 1964, levees were constructed on the site by the state-run Taiwan Sugar Corporation (台灣糖業公司) to reclaim the land and convert it into sugarcane farms, rice fields, and a site for aquaculture.

Please watch the following video of Aogu Wetlands and Forest Park in Taiwan:

However, land subsiding and the cessation of farming in the 1970s caused the area to revert to a natural wetland that has since attracted a large number of migratory birds, waterfowl, resident birds, and other wildlife and it has become a wildlife conservation sanctuary.

Encompassing lagoons, marshes, sandbars, mudflats, beefwood trees, mangrove swamps, and windbreak forests, the Aogu Wetland was designated as the Aogu Wildlife Conservation Sanctuary in 2009 and is overseen by the Chiayi County Government. It was also listed as a Wetland of National Importance (國家級溼地) in 2015 and as one of Taiwan’s Important Birds and Biodiversity Areas (IBAs) by BirdLife International.

According to a survey conducted by the Forestry Bureau of Taiwan’s Council of Agriculture in 2018, some 2,195 endangered black-faced spoonbills, or 56 percent of its global population (3,941), were sighted in Taiwan last winter. Among them, 559 were spotted in Chiayi County, where the Aogu Wetland is located. This wetland is undoubtedly one of the primary wintering destinations for the endangered species in the world.

The wetland, sandbars, fish farms, plantations, and farmland adjacent to the wetland was designated as an ecological park. The Aogu Wetlands and Forest Park (鰲鼓濕地森林園區) was established in 2012 and it is open to the public.

The master plan of the park was designed by National Sun Yat-sen University and won an excellence award from the American Society of Landscape Architects (ASLA,美國景觀建築協會) in 2011. The park is one of the best destinations for bird watching in Taiwan.