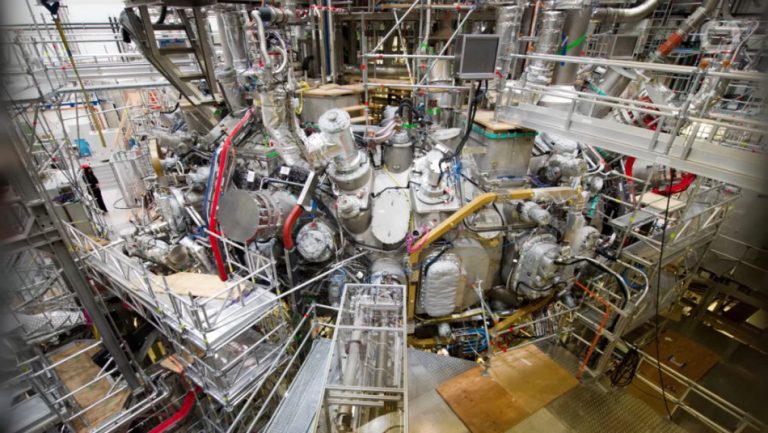 An American startup, Commonwealth Fusion Systems [CFS], is promising to demonstrate the workings of fusion power by 2025. (Image: Screenshot via YouTube)

As far as the quest for unlimited energy is concerned, fusion energy is considered to be the holy grail. Scientists across the world have been hard at work for decades in making nuclear fusion reactors a reality without much success. But now, an American startup, Commonwealth Fusion Systems [CFS], is promising to demonstrate the workings of fusion power by 2025.

The mechanics of fusion power is simple — “Fusion happens inside stars because of the crushing pressure created by their gravity. To generate that effect inside a fusion reactor, ionized gas — which is called plasma — must be heated and compressed by man-made forces, such as an ultra-powerful magnetic field… If you get enough plasma to stay hot enough for long enough, then you can trigger so much fusion inside it that a huge multiplier effect is unlocked. At that point, the energy that is released helps keep the plasma hot, extending the reaction. And there still is plenty of energy left over to turn into electricity,” according to Brian Bergstein (Medium).

But despite several years of research, heating the plasma and keeping it in place still continues to consume far more energy than what one can harvest from it. This is what keeps fusion power from getting commercialized. A multi-billion dollar reactor, ITER, is under construction in France to show that excess energy can be harvested from a fusion reaction. But here again, the scientists face another problem — ITER is the size of 60 soccer fields. So, even if the experiment does turn out successful, commercializing fusion power still remains impossible.

This is where CFS comes in. CFS is rethinking the design of fusion reactors to make them modular and far cheaper. The team made magnets out of a newly developed superconducting tape and wound it around the coils of a reactor. This not only doubled the strength of the magnetic field that contains the plasma, but it also cut down energy costs required to keep the reactor cool. Replacing rigid superconductors with the new tape meant that the reactor could be made 10 times smaller; this was a huge leap in innovation.

Though the company aims to get their reactor running by 2025, its CEO, Robert Mumgaard, believes that it could happen earlier. CFS has raised money from a host of private investors, including a firm that is funded by Jeff Bezos and Bill Gates. Almost US$75 million has been invested in the company. CFS is collaborating with MIT on the project.

The case for fusion power

Scientists estimate the world’s population will be around 9 billion people by the year 2040. This would require massive amounts of energy, raising global electricity demand by up to 45 percent. But how do we generate this electricity without harming the environment?

Burning coal and other fossil fuels will only emit more greenhouse gases and worsen the climate scenario. Building more dams for hydroelectricity is impossible. Using wind and solar power looks attractive. But storing their energy would require such huge numbers of batteries that it ends up being too costly and dangerous for the environment.

The only remaining option is nuclear fusion reactors. They emit zero greenhouse gases and do not contribute to climate change. The Earth has enough fusion fuel that human energy demands can be met for millions of years without a break. And unlike existing nuclear reactors, fusion reactors do not produce any long-lasting waste.

On the flipside, the tritium component that is required for the fusion process can only be generated via fission reactors, which means a continued dependence on fission and a heightened risk of nuclear proliferation.

In addition, plutonium 239 can easily be produced in fusion reactors by just placing a natural uranium oxide at any location where neutrons are flying. As such, every fusion reactor can theoretically become a production center for nuclear weapons.

This makes commercialization of the technology a tricky affair. Will the governments be comfortable with private companies all across the world operating reactors where they can produce weapons of mass destruction?

Many believe that the large-scale implementation of fusion reactors can only start by 2050. Hence, fusion power is not an immediate solution that can resolve the global warming crisis within the next decade.

There is also no guarantee that all research being done on the subject will ever yield positive results. As such, some say that the billions being invested in fusion research will be better utilized by spending on developing existing renewable energy technologies like solar and wind power.