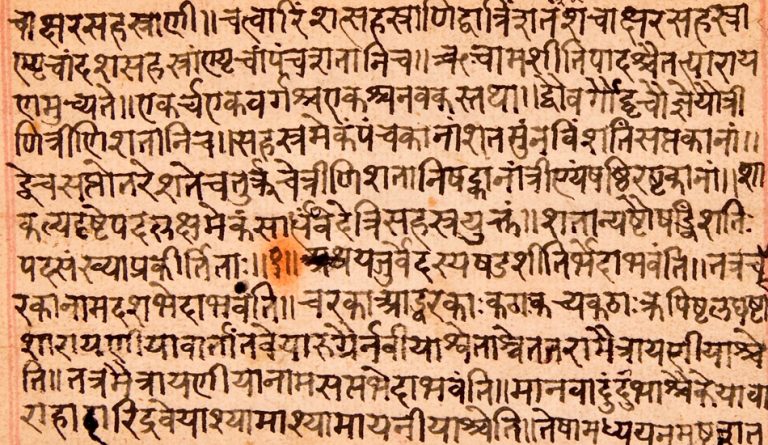 The Vedas, written in Sanskrit, are one of the oldest religious books in the world. (Image: Ms Sarah Welch via Wikimedia Commons)

In a move that validates the wisdom and ingenuity of ancient civilizations, a group of researchers from the Institute of Logic and Computation at TU Wien, Austria, is using Indian religious texts, written in Sanskrit, to teach ethics to AI. The texts, called the Vedas, are believed to have been written down about 4,000 years ago.

Vedas and mimamsa used to teach ethics to AI

In Sanskrit, Vedas translates to “knowledge.” The books are revered by Hindus all across the world as the first source of spiritual revelation to humanity. Hindus believe the Vedas to be “apauruseya,” or that which has not been created by man, but by a superhuman.

There are four Vedas — Rigveda, Yajurveda, Samaveda, and Atharvaveda. Among these four, the Rigveda is considered to be the oldest and the most sacred. Each Veda is further subdivided into four texts. The Samhitas are concerned with mantras. The Aranyakas deal with rituals and ceremonies. The Brahmanas are commentaries on rituals and ceremonies. The Upanishads are texts that discuss philosophy.

Just as Christianity has various schools of thought that interpret the Bible, Hinduism has numerous such schools that interpret the Vedas. One such school is the Mimamsa, which uses an extremely rigorous approach to analyze the prohibitions and obligations mentioned in the Vedas to support their arguments. It is this method of argument of the Mimamsa that got researchers interested in using the Vedas to teach ethics to AI.

In ancient times, scholars of the Vedas had an intense debate about a few verses that talked about conducting an animal sacrifice. However, considering that the Vedas placed great importance on not harming living beings, the scholars were unable to reconcile the two.

In the 7th century CE, a Mimamsa scholar named Prabhakara applied an intricate set of logical rules to support his argument. Other scholars refused to believe his reasoning and the matter was left unresolved. However, when researchers at Vienna translated Prabhakara’s Mimamsa arguments into mathematical rules, they discovered something amazing — he was right all along. Prabhakara’s logic was flawless.

“For us, this was the first proof of concept that we can really learn something new by linking Indology and formal logic… But ultimately, we want to accomplish much more. We want to understand how to express with mathematical precision beneficial logics dealing with prohibitions and obligations,” Agata Ciabattoni, supervisor of the research project, said to Phys.org.

Classical logic only deals with “true” or “false” statements. However, this is useless in real-world situations. What is required for building an ethical system in an AI is something called “deontic logic” that deals with a set of obligations and prohibitions that have to be followed when certain events are triggered.

For instance, suppose an ethics system is being created for a self-driving vehicle. If a situation were to occur where the vehicle was on a collision course with a human being, but avoiding it would mean the death of the passenger, relying on simple classical logic to decide a course of action is out of the question. Only deontic logic, with its well-defined rules of obligations and prohibitions, can allow the car to take a logically ethical decision.

Several people have tried creating a system of perfect deontic logic, only to eventually fail. But with Vedas and Mimamsa, Agata believes that his team can create a workable deontic logic system.