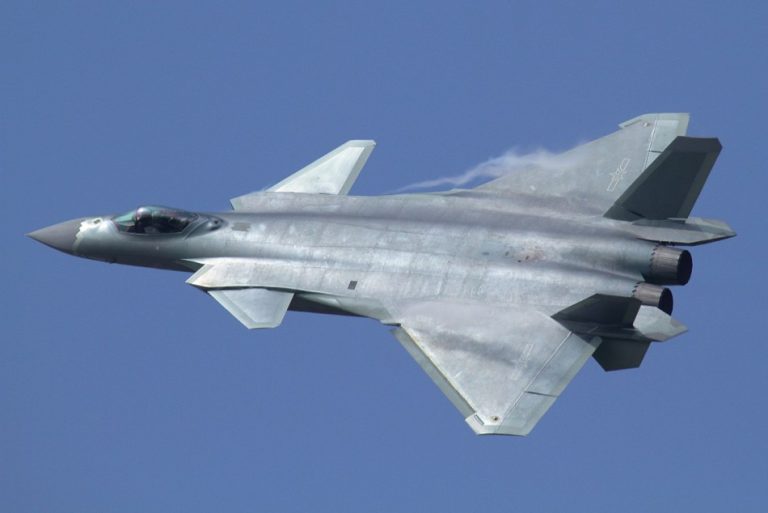 Flypast of the Chengdu J-20 during the opening of Airshow China in Zhuhai. (Image: Alert5 via Wikimedia Commons)

“The J-20 will also change the history of the air force in Asia-Pacific region. In the past, only the U.S. and its allies like Japan were capable of arming stealth fighter jets. But now, their monopoly in this region has been broken by China’s J-20,” Song Zongping, a military expert and TV commentator, said in a statement (China Military).

Although Chengdu J-20 stealth fighter has been positioned as a fifth-generation jet by Beijing, this is not entirely true. To be classified as fifth-generation, the plane should have an engine that allows it to reach supersonic speeds without having to use afterburners. Only then can the craft maintain their stealth. However, Beijing’s J-20 stealth fighter jet will not be able to retain stealth when traveling at supersonic speeds. Why? Because the jet is not equipped with such an engine.

Beijing had been developing the WS-15 engine to deliver the performance. But “the WS-15 engine designed for the J-20 exploded during a ground running test in 2015… The explosion indicated the WS-15 is not reliable, and so far there is no fundamental solution to overcome such a problem … that’s why the J-20 is using WS-10B engines now,” an anonymous source said to the South China Morning Post.

What this means is that Beijing has equipped the J-20 with an engine designed for previous generation airplanes. As such, not only will it be unable to match the stealth abilities of a true fifth-generation craft at supersonic speeds, but its fuel efficiency and maneuverability will also be severely affected.

“[The J-20 is] certainly likely to be more capable as an air superiority platform than anything else the People’s Liberation Army Air Force (China’s air force’s official name) is currently operating… [But] in terms of thrust to weight, maneuverability, and high altitude performance, it is unlikely to match up to the U.S. or European air superiority fighters,” Justin Bronk, an aerial combat expert at the Royal United Services Institute, said to Business Insider.

Meanwhile, the U.S. Air Force is currently developing the Penetrating Counter Air (PCA) aircraft that can give it a significant advantage in battle. The PCA will be stealthier than its predecessors, possibly by ditching its vertical stabilizer. But what makes the jet potent is its alleged ability to break through the enemy territory’s air defense systems.

“The fighter will be optimized to penetrate enemy airspace… PCA could escort the Air Force’s new B-21 Raider bombers on long-distance flights deep into enemy territory, swatting away enemy interceptors so the bomber crews can hit their targets and return home,” according to Popular Mechanics.

On the downside, the fighters are expected to be very expensive. While an F-35A joint fighter costs US$94 million, PCA fighters are projected to cost US$300 million apiece. This has made some in the Pentagon apprehensive of the project. But the possibility of having an aircraft that cannot be stopped by enemy defenses keeps the military interested in the project. The U.S. Air Force has reportedly sought US$504 million in 2019 for the PCA development project.