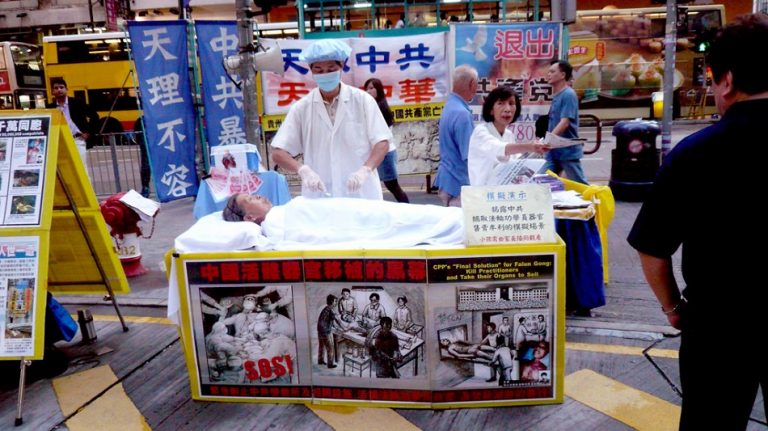 Health officials in China have admitted to investigators that they source organs from living Falun Gong practitioners for transplant purposes, says a new report.

From October 19 to December 2 last year, investigators spoke via phone with presidents or directors of a number of Chinese hospitals, says the report released last month by the U.S-based World Organization to Investigate the Persecution of Falun Gong (WOIPFG).

In one recorded call, the investigator spoke with Hang Hualian, the chief medical officer of the liver transplantation surgery department at Shanghai Renji Hospital.

“I’ll try my best to get it done for you within one week,” said Hang.

Hang replied: “Yes, this is for sure.”

In another call an investigator made a request to Chen Xinguo, the director of liver transplantation at the Beijing General Hospital of Armed Police, to provide Falun Gong practitioners’ organs. “Okay! Okay!” replied Chen.

In a call to the First Affiliated Hospital at Sun Yat-sen University, an investigator spoke with He Xiaoshun, the hospital’s vice president.

He responded by saying: “Correct.”

His hospital conducts 200 liver transplant operations a year, He told the investigator. “[For a liver transplant it] usually takes one or two weeks to arrange an operation, but sometimes [it would take] one month. We have a lot available here, because we are a big center,” He said.

The report outlined He’s credentials, which included being a member of the International Liver Transplant Society and the chairman of the Organ Transplantation Professional Committee.

Dr. Li, a doctor-on-duty at the Urology Surgery Department of Beijing Chaoyang Hospital, told the investigator that the normal source for kidneys came from Falun Gong practitioners. “Generally speaking, [we] not only take a kidney, but also the heart, and liver; it takes about three or four hours for this process,” said Dr. Li, according to the report.

A total of 17 telephone investigations were published in the report and they involved 12 hospitals in the major cities of 11 provinces and central government direct-controlled municipalities, including Beijing, Tianjin, and Shanghai.

The WOIPFG report follows several investigative reports that have included admissions via telephone calls about Falun Gong practitioners being the source of organs. The first to include such admissions was a report in 2006 by Canadian researchers former MP David Kilgour and human rights lawyer David Matas.

The conclusion of their report said that the source of the organs came from Falun Gong practitioners who were held in prisons and killed on demand. Other prisoners of conscience — Tibetans, Uyghurs, and House Christians — were also being targeted by the communists as a source of bodily organs, only to a lesser extent, they said.

In 2016, Kilgour and Matas updated their findings, along with investigative journalist Ethan Gutmann, with another report that estimated there are 60,000 to 100,000 organ transplants performed annually in China.

They concluded the source for these organs was still prisoners of conscience, despite China’s effort to sell to the world the idea they were moving toward having a functioning donation system and declarations saying they had outlawed the use of prisoner organs in 2015.

WOIPFG’s president is Dr. Wang Zhiyuan, a former Chinese military doctor, who has lived in the U.S. since 1995. He joined efforts to investigate the allegations and during 2006-2007, his team phoned into China posing as family members of ill people needing an organ transplant.

They spoke with doctors who admitted the source of their organs was from practitioners of Falun Gong, a spiritual discipline based on meditation and slow-moving exercises, and three main principles: Truthfulness, Compassion, Tolerance.

The communist state has persecuted Falun Gong since 1999.

A 2017 report by U.S-based Freedom House, a government-funded NGO, estimated that 7-10 million people continue to practice Falun Gong in China, while Falun Gong sources outside of China give a figure of 20-40 million.

In this hour-long video further below, Dr. Wang explains their investigation and the amount of evidence uncovered that joins research done by others to prove this crime is real and ongoing in China.

A U.S. House of Representatives resolution was unanimously passed in mid-2016 that urged the Chinese government to stop harvesting the organs of prisoners of conscience and end the persecution against Falun Gong.

WOIPFG has said that the Chinese Communist Party also uses Falun Gong practitioners in human drug experiments and used them to analyze psychological processes when a human being is being put to death.