Chinese Scientist Who Gene Edited Babies Might Be Sentenced to Death 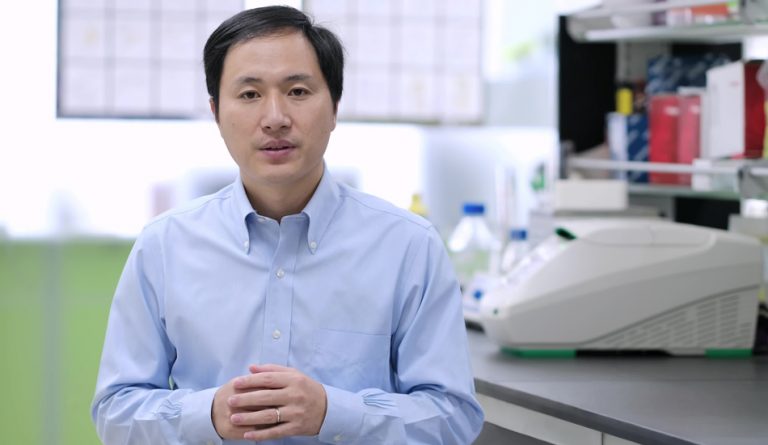 He Jiankui, the Chinese scientist who shocked the world in November last year by revealing that he had gene edited two babies, is currently under house arrest. (Image: The He Lab via Wikimedia Commons)

He Jiankui, the Chinese scientist who shocked the world in November last year by revealing that he had gene edited babies, is currently under house arrest. Some believe that He might be sentenced to death by the Chinese regime as a quick way to wash their hands of his research and avoid taking any responsibility for the scientist’s actions regarding the gene edited babies.

Punishing He for his experiment with gene edited babies

He Jiankui argued that he edited the genes of the babies so that they wouldn’t inherit their parent’s HIV infection. However, his defense has received no support from the scientific community. Many scientists claim that the babies now face a biological uncertainty for their entire life, not knowing exactly what has been changed in their genetic code.

“He really thought that he was doing good, that what he was doing was the next big thing, and really important for the good of mankind… Pretty much everyone he talked to had said ‘Don’t do it.’ We’d heard he had ethical approval, so we were getting scared. But clearly it was all too late,” Robin Lovell-Badge, head of the Laboratory of Stem Cell Biology and Developmental Genetics at the Francis Crick Institute, said in a statement (Popular Mechanics).

After public opinion turned against him, He Jiankui disappeared. It was later discovered that he was put under house arrest and was being guarded by the Chinese government, which has officially condemned the experiment. The ministries of health and science are hard at work trying to determine the people who participated in He’s work.

Given the immense moral and ethical issues surrounding the experiment, there is a good chance that He might have corrupted a few of the collaborators. If proven, He could be charged with corruption, which can come with a punishment of death in China. However, this might also be Beijing’s way of avoiding any responsibility for He’s actions.

“He should be accountable for his actions, but the death penalty, should it come down to that, would be undeniably excessive. It would be unfortunate for He to be turned into some kind of scapegoat — a convenient pawn for the government and its officials to defer responsibility for underlying systemic and regulatory issues,” according to Gizmodo.

He Jiankui was a very rich physicist who made a lot of money selling companies. As a result, he used to fund most of the research himself, thereby avoiding oversight by a funding body. The Chinese government had apparently treated him very well and asked him to move back to China from Stanford University in California under the “Thousand Talents Program.” He was given 1 million Yuan (around US$148,000) by the Chinese regime as angel funding to set up his biotech companies.

Since he did not possess a deep knowledge of biology, He Jiankui was in no position to be involved in something as complex as gene editing. For instance: “He did not know enough about the mutation he was trying to introduce into the babies — known as Delta 32 — which was intended to protect the girls from HIV, but could also increase the risk of West Nile virus and influenza,” according to CNN.

Though He Jiankui initially dismissed such concerns, Lovell-Badge claims that he later asked for more information on the risk of influenza, which raises the possibility that the experiment might have increased the babies’ risk of the disease. Lovell-Badge believes that the family members might not have been told about the influenza risk, which makes He’s action even more questionable.