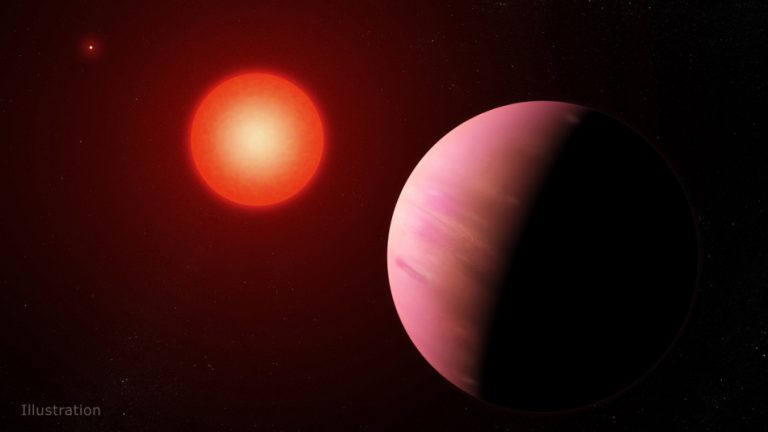 The newfound planet K2-288Bb, illustrated here, is slightly smaller than Neptune. Located about 226 light-years away, it orbits the fainter member of a pair of cool M-type stars every 31.3 days. (Image: Francis Reddy via NASA's Goddard Space Flight Center)

Using data from NASA’s Kepler space telescope, citizen scientists have discovered a new world, a planet roughly twice the size of Earth located within its star’s habitable zone, the range of orbital distances where liquid water may exist on the planet’s surface. The new world, known as K2-288Bb, could be rocky or could be a gas-rich planet similar to Neptune.

Its size is rare among exoplanets — planets beyond our solar system. Adina Feinstein, a University of Chicago graduate student who is the lead author of a paper describing the new planet accepted for publication by The Astronomical Journal, said:

“It’s a very exciting discovery due to how it was found, its temperate orbit, and because planets of this size seem to be relatively uncommon.”

New world in the constellation Taurus

Located 226 light-years away in the constellation Taurus, the new world lies in a stellar system known as K2-288, which contains a pair of dim, cool M-type stars separated by about 5.1 billion miles (8.2 billion kilometers) — roughly six times the distance between Saturn and the Sun. The brighter star is about half as massive and large as the Sun, while its companion is about one-third the Sun’s mass and size. The new planet, K2-288Bb, orbits the smaller, dimmer star every 31.3 days.

In 2017, Feinstein and Makennah Bristow, an undergraduate student at the University of North Carolina Asheville, worked as interns with Joshua Schlieder, an astrophysicist at NASA’s Goddard Space Flight Center in Greenbelt, Maryland. They searched Kepler data for evidence of transits, the regular dimming of a star when an orbiting planet moves across the star’s face.

Examining data from the fourth observing campaign of Kepler’s K2 mission, the team noticed two likely planetary transits in the system. But scientists require a third transit before claiming the discovery of a candidate planet, and there wasn’t a third signal in the observations they reviewed. As it turned out, though, the team wasn’t actually analyzing all of the data.

In Kepler’s K2 mode, which ran from 2014 to 2018, the spacecraft repositioned itself to point at a new patch of sky at the start of each three-month observing campaign. Astronomers were initially concerned that this repositioning would cause systematic errors in measurements.

Co-author Geert Barentsen, an astrophysicist at NASA’s Ames Research Center in California’s Silicon Valley and the director of the guest observer office for the Kepler and K2 missions, said:

“Re-orienting Kepler relative to the Sun caused miniscule changes in the shape of the telescope and the temperature of the electronics, which inevitably affected Kepler’s sensitive measurements in the first days of each campaign.”

To deal with this, early versions of the software that was used to prepare the data for planet-finding analysis simply ignored the first few days of observations — and that’s where the third transit was hiding. As scientists learned how to correct for these systematic errors, this trimming step was eliminated — but the early K2 data Barstow studied had been clipped. Schlieder, a co-author of the paper explained:

“We eventually re-ran all data from the early campaigns through the modified software and then re-ran the planet search to get a list of candidates, but these candidates were never fully visually inspected.

“Inspecting, or vetting, transits with the human eye is crucial because noise and other astrophysical events can mimic transits.”

Instead, the re-processed data were posted directly to Exoplanet Explorers, a project where the public searches Kepler’s K2 observations to locate new transiting planets. In May 2017, volunteers noticed the third transit and began an excited discussion about what was then thought to be an Earth-sized candidate in the system, which caught the attention of Feinstein and her colleagues. Feinstein said:

“That’s how we missed it — and it took the keen eyes of citizen scientists to make this extremely valuable find and point us to it.”

Estimated to be about 1.9 times Earth’s size, K2-288Bb is half the size of Neptune. This places the planet within a recently discovered category called the Fulton gap, or radius gap. Among planets that orbit close to their stars, there’s a curious dearth of worlds between about 1.5 and two times Earth’s size.

This is likely the result of intense starlight breaking up atmospheric molecules and eroding away the atmospheres of some planets over time, leaving behind two populations. Since K2-288Bb’s radius places it in this gap, it may provide a case study of planetary evolution within this size range.

On Oct. 30, 2018, Kepler ran out of fuel and ended its mission after nine years, during which it discovered 2,600 confirmed planets around other stars — the bulk of those now known — along with thousands of additional candidates astronomers are working to confirm. And while NASA’s Transiting Exoplanet Survey Satellite is the newest space-based planet hunter, this new finding shows that more discoveries await scientists in Kepler data.

Provided by: Francis Reddy, Jet Propulsion Laboratory [Note: Materials may be edited for content and length.]