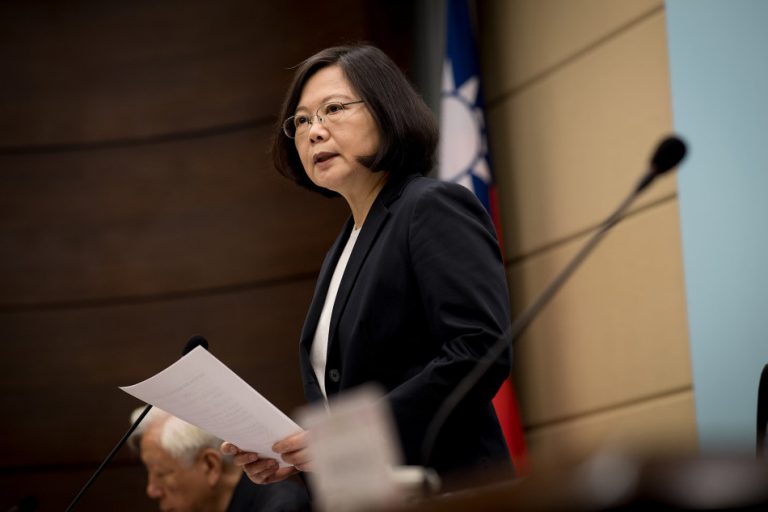 'How we respond to anti-democracy forces will determine what kind of values we pass on to future generations,' said Taiwan’s president Tsai Ing-wen. (Image: via Flickr)

Xi Jinping wants to have the same “one country, two systems” arrangement for Taiwan that it has with Hong Kong. Just recently, China’s top leader Xi Jinping emphasized at the commemorative meeting of the 40th anniversary of the publication of the Taiwan Compatriots, in Beijing, that he firmly opposed the two Chinas, one China, One Taiwan, and Taiwan independence campaigns. While China sees Taiwan as a breakaway province that will eventually become part of mainland China again, Taiwan considers itself a separate nation, defined by its separate values and progressively different political system and views.

Will Taiwan and China eventually unify under ‘one country, two systems’?

Xi further emphasized that Taiwan and China should finally unify and eventually will. The Chinese ruler suggested having two systems but being one country would be the ideal resolution to achieve a Chinese reunification. “One country, two systems is the best way,” Xi advocated in his speech. Furthermore, he stressed that the Taiwan issue is no one else’s business as it is China’s internal affair, and no external interference is needed: “We do not promise to renounce the use of force and reserve the option to take all necessary measures.”

Xi Jinping declared that on the foundation of the common political basis and leaning on the 1992 consensus, according to which any group in Taiwan that the Chinese Communist Party (CCP) has formal talks with must support the 1992 consensus, which means opposing Taiwan independence, he persuasively advocated for one country.

The President of the Republic of China, Tsai Ing-wen, responded in a temporary press conference at the Presidential Palace, where she said: “I want to reiterate here that Taiwan will never accept ‘one country, two systems.’ The public opinions from the vast majority of Taiwanese also resolutely oppose one country, two systems, and this is also the Taiwanese consensus.”

How we respond to anti-democracy forces will determine what kind of values we pass on to future generations. If you agree with the 23 million people of #Taiwan, who deeply cherish their democratic way of life, I hope you can #SpeakUpforTaiwan & defend our shared values together. pic.twitter.com/oQNNA6rTKy

Party culture, a hurdle to overcome

Taiwan’s president sees room for negotiations; however, she stressed that it will never be one singled out fraction alone, but the government as an extension of the will of the Taiwanese people that will negotiate: “We are willing to sit down and talk, but as a democratic country, all political negotiations and negotiations involving cross-strait relations must be authorized and supervised by the people of Taiwan, and through the cross-strait government-to-government model. Under that principle, no one, or any single group, has the right to represent the people of Taiwan to conduct political consultations.”

Regarding the development of cross-strait relations, Tsai Ing-wen called out China’s shortcoming in acknowledging the validity of Taiwan as a democratic and sovereign country, making several demands that, if met, could foster a future path to closer relations between the People’s Republic of China and the Republic of China:

“Firstly, the Chinese government must recognize the existence of the Republic of China or Taiwan, and not to deny the democratic state system jointly established by the Taiwan people.

“Secondly, China must respect the choices of freedom and democracy of the 23 million Taiwanese people, and not try to divide and bribe in order to intervene in their choices.

“Thirdly, we must deal with the differences between the two sides in a peaceful and equal manner, instead of using pressure and intimidation to try to make the people of Taiwan surrender.

“Fourth, it must be the government or the public authority authorized by the government sitting down to talk. Any political consultation without the authorization and supervision of the people cannot be called democratic consultation. This is Taiwan’s position; this is a democratic stand.”

Speaking of cross-strait economic and trade relations, Tsai Ing-wen stressed: “We support cross-strait mutual benefit and mutual prosperity; but we oppose Beijing’s profit-seeking as the core to lure Taiwan’s technology, capital, and talents to mainland China.”

Tsai Ing-wen further stressed the need for Beijing to finally meet common demands by the international society regarding its character traits and responsibilities: “I want to remind the Beijing authorities that big countries must display the character traits and responsibilities of a big country. The international community is waiting to see China making changes, so it can become a trusted partner.”

In the end, Tsai Ing-wen reiterated that Taiwan will not give up sovereignty and will not make any concessions on Taiwan’s subjectivity: “The people of Taiwan Cherish democracy and its way of life. We appeal to China to bravely step up for democracy. Only by doing so can you truly understand the Taiwanese people’s ideas and persistence.”