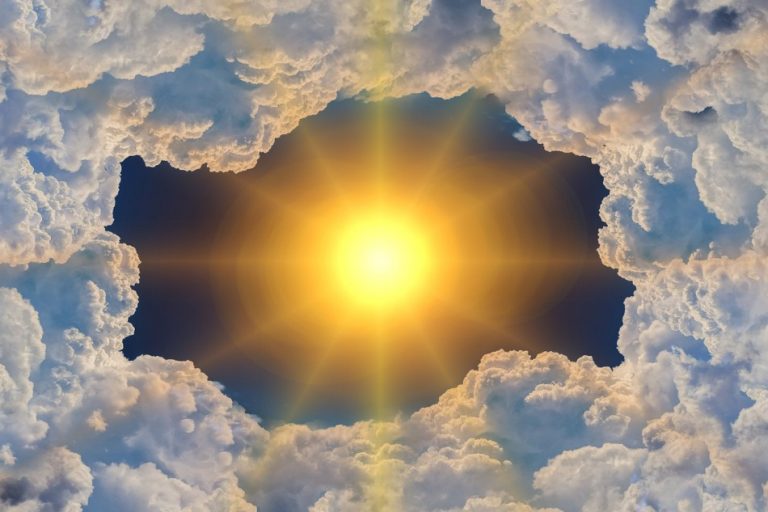 At the last moment of a near-death experience, a luminous, divine light appears. (Image: geralt via Pixabay)

Earlier this year, the United Nations announced some much-needed positive news about the environment: The ozone layer, which shields the Earth from the Sun’s harmful ultraviolet radiation, and which was severely depleted by decades of human-derived, ozone-destroying chemicals, is on the road to ozone recovery.

The dramatic turnaround is a direct result of regulations set by the 1987 Montreal Protocol, a global treaty under which nearly every country in the world, including the United States, successfully acted to ban the production of chlorofluorocarbons (CFCs), the main agents of ozone depletion. As a result of this sustained international effort, the United Nations projects that the ozone layer is likely to completely heal by around the middle of the century.

But a new MIT study, appearing in Nature Geoscience, identifies another threat to the ozone layer’s recovery: chloroform — a colorless, sweet-smelling compound that is primarily used in the manufacturing of products such as Teflon and various refrigerants. The researchers found that between 2010 and 2015, emissions and concentrations of chloroform in the global atmosphere have increased significantly.

They were able to trace the source of these emissions to East Asia, where it appears that production of products from chloroform is on the rise. If chloroform emissions continue to increase, the researchers predict that the recovery of the ozone layer could be delayed by four to eight years. Co-author Ronald Prinn, the TEPCO Professor of Atmospheric Science at MIT, said:

“[Ozone recovery] is not as fast as people were hoping, and we show that chloroform is going to slow it down further.

“We’re getting these little side stories now that say, just a minute, species are rising that shouldn’t be rising. And certainly a conclusion here is that this needs to be looked at.”

Xuekun Fang, a senior postdoc in Prinn’s group, is the lead author of the paper, which includes researchers from the United States, South Korea, Japan, England, and Australia.

Chloroform is among a class of compounds called “very short-lived substances” (VSLS), for their relatively brief stay in the atmosphere (about five months for chloroform). If the chemical were to linger, it would be more likely to get lofted into the stratosphere, where it would, like CFCs, decompose into ozone-destroying chlorine.

But because it is generally assumed that chloroform and other VSLSs are unlikely to do any real damage to ozone, the Montreal Protocol does not stipulate regulating the compounds. Prinn said:

“But now that we’re at the stage where emissions of the more long-lived compounds are going down, the further recovery of the ozone layer can be slowed down by relatively small sources, such as very short-lived species — and there are a lot of them.”

Prinn, Fang, and their colleagues monitor such compounds, along with other trace gases, with the Advanced Global Atmospheric Gases Experiment (AGAGE) — a network of coastal and mountain stations around the world that has been continuously measuring the composition of the global atmosphere since 1978.

There are 13 active stations scattered around the world, including in California, Europe, Asia, and Australia. At each station, air inlets atop typically 30-foot-tall towers pull in air about 20 times per day, and researchers use automated instruments to analyze the atmospheric concentrations of more than 50 greenhouse and ozone-depleting gases. With stations around the world monitoring gases at such a high frequency, AGAGE provides a highly accurate way to identify which emissions might be rising and where these emissions may originate.

Using an atmospheric model, Fang and his colleagues estimated that between 2000 and 2010, global chloroform emissions remained at about 270 kilotons per year. However, this number began climbing after 2010, reaching a high of 324 kilotons per year in 2015. Fang observed that most stations in the AGAGE network did not measure substantial increases in the magnitude of spikes in chloroform, indicating negligible emission rises in their respective regions, including Europe, Australia, and the western United States.

However, two stations in East Asia — one in Hateruma, Japan, and the other in Gosan, South Korea — showed dramatic increases in the frequency and magnitude of spikes in the ozone-depleting gas.

The rise in global chloroform emissions seemed, then, to come from East Asia. To investigate further, the team used two different three-dimensional atmospheric models that simulate the movement of gases and chemicals, given global circulation patterns. Each model can essentially trace the origins of a certain parcel of air.

Fang and his colleagues fed AGAGE data from 2010 to 2015 into the two models and found that they both agreed on chloroform’s source — East Asia. Fang said:

“We conclude that eastern China can explain almost all the global increase.

“We also found that the major chloroform production factories and industrialized areas in China are spatially correlated with the emissions hotspots.

“And some industrial reports show that chloroform use has increased, though we are not fully clear about the relationship between chloroform production and use, and the increase in chloroform emissions.”

Last year, researchers from the United Kingdom reported on the potential threat to the ozone layer from another very short-lived substance, dichloromethane, which, like chloroform, is used as a feedstock to produce other industrial chemicals. Those researchers estimated how both ozone and chlorine levels in the stratosphere would change with increasing levels of dichloromethane in the atmosphere.

Fang and his colleagues used similar methods to gauge the effect of increasing chloroform levels on ozone recovery. They found that if concentrations remained steady at 2015 levels, the increase observed from 2010 to 2015 would delay ozone recovery by about five months. If, however, concentrations were to continue climbing as they have through 2050, this would set a complete healing of the ozone layer back by four to eight years.

The fact that the rise in chloroform stems from East Asia adds further urgency to the situation. This region is especially susceptible to monsoons, typhoons, and other extreme storms that could give chloroform and other short-lived species a boost into the stratosphere, where they would eventually decompose into the chlorine that eats away at ozone. Prinn said:

“There’s an unfortunate coherence between where chloroform is being emitted and where there are frequent storms that puncture the top of the troposphere and go into the stratosphere.

“So, a bigger fraction of what’s released in East Asia gets into the stratosphere than in other parts of the world.”

Fang and Prinn say that the study is a “heads-up” to scientists and regulators that the journey toward repairing the ozone layer is not yet over. Prinn added:

“Our paper found that chloroform in the atmosphere is increasing, and we identified the regions of this emission increase and the potential impacts on future ozone recovery, so future regulations may need to be made for these short-lived species.

“Now is the time to do it, when it’s sort of the beginning of this trend; otherwise, you will get more and more of these factories built, which is what happened with CFCs, where more and more end uses were found beyond refrigerants. For chloroform, people will surely find additional uses for it.”

Provided by: Massachusetts Institute of Technology [Note: Materials may be edited for content and length.]