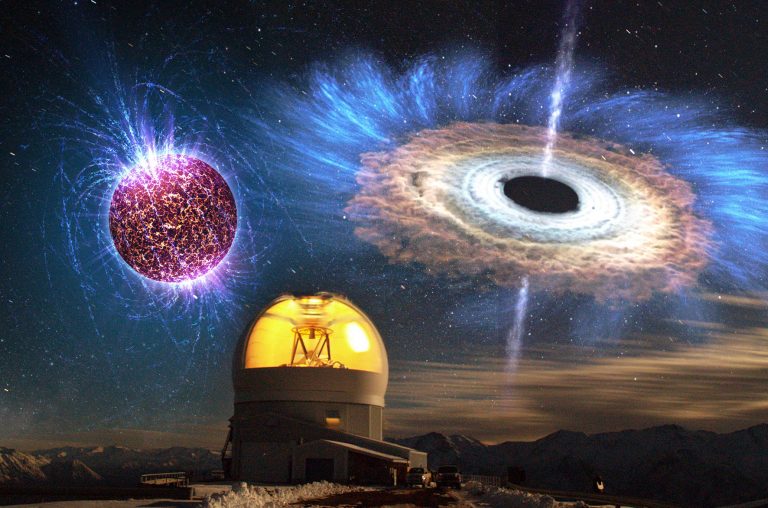 An unusual supernova studied by multiple telescopes, including the SOAR telescope and other telescopes at the National Science Foundation’s (NSF) Cerro Tololo Inter-American Observatory (CTIO) and NSF’s Kitt Peak National Observatory (KPNO), is thought to herald the birth of a new black hole or neutron star, caught at the exact moment of its creation.

Observations made with facilities ranging from X-rays to optical and radio wavelengths were used to understand this remarkable event. These multi-messenger observations give astronomers a rare glimpse into the physics at play during the creation of a black hole or neutron star.

A mysterious bright glow from a new type of supernova

On June 16, 2018, a sky survey telescope in Hawai’i alerted the astronomical community to the sudden appearance of a new object in the sky. It was similar to a supernova, except that it brightened, and then faded, faster than a typical supernova, and was intrinsically brighter at its peak. A supernova (from nova, meaning “new” star) is a sudden explosion of a massive star that has reached the end of its lifetime, leading to the formation of a black hole or neutron star.

The transient object, assigned the designation AT2018cow, was immediately nicknamed “the Cow” based on the final 3 letters of its name. “The Cow” is located in a relatively nearby galaxy — only 200 million light-years away from our own Milky Way galaxy in the direction of the constellation Hercules.

It takes a team

Immediately after receiving the alert, an international research team led by Raffaella Margutti (Northwestern University) leaped into action and began observing the unusual source across the electromagnetic spectrum — at X-ray, optical, infrared, and radio wavelengths. Telescopes around the world contributed to the effort by using spectroscopy to decode the nature of the source.

Among the telescopes that contributed was the Southern Astrophysical Research Telescope (SOAR) in Chile, whose instruments obtained spectra of the Cow. With spectra, which spread out the light in the form of a rainbow, astronomers could quickly confirm that matter was expanding from the object at up to 10 percent the speed of light. Régis Cartier, who made the SOAR observations, said:

“Almost from the very start, I realized that this transient was special. It was fast, blue, and bright, different from any supernova seen before. I dropped everything else I was working on to focus on understanding this event.”

In addition to the SOAR telescope, other telescopes at NSF’s CTIO and KPNO imaged the object and contributed to a broader picture as the Cow faded away.

Because the collapsed star was surrounded by a relatively small amount of debris, the team was able to peer through the debris and get a glimpse of the object’s “central engine.” This rare event will help astronomers better understand the physics at play within the first moments of the creation of a black hole or neutron star. The results were presented at this week’s meeting of the American Astronomical Society in Seattle, Washington. Giacomo Terreran (Northwestern University), who led the CTIO observations, said:

“We think that ‘The Cow’ is the formation of an accreting black hole or neutron star.

“We know from theory that black holes and neutron stars form when a star dies, but we’ve never seen them right after they are born.” This event may represent a new class of objects within the category known as fast luminous transients.

A whole new world of transients

Although a supernova like the Cow has never been seen before, Cartier expects that astronomers will detect larger numbers of such rare supernova events in the future. Now that surveys are searching for sources that vary on a wider range of timescales, “we’ve already discovered a whole family of fast transients that we didn’t know existed,” noted Cartier. The SOAR telescope is gearing up to help us understand these new events. Dr. Jay Elias, Director of SOAR, said:

“The SOAR telescope was designed from the start to provide flexible instrument configurations, allowing it to respond quickly to events like this.

“There are many astronomical surveys observing interesting transient events, as well as other events, such as last year’s kilonova detected by LIGO, which was also observed at SOAR.

“Very soon, there will be even more interesting transient events from the Large Synoptic Survey Telescope (LSST) and other large-scale survey telescopes.”

The LSST is a new telescope being built on the same mountaintop as the SOAR telescope with major funding from NSF: It will conduct a 10-year survey of the sky with a special emphasis on transient events. The SOAR telescope, located in Chile, is operated by Cerro Tololo Inter-American Observatory, a division of the National Optical Astronomical Observatory, which is operated by the Association of Universities for Research in Astronomy Inc. under a cooperative agreement with the National Science Foundation.

The CTIO complex is part of the U.S. National Optical Astronomy Observatory (NOAO), along with the Kitt Peak National Observatory (KPNO) in Tucson, Arizona. NOAO is operated by the Association of Universities for Research in Astronomy (AURA), under a cooperative agreement with the National Science Foundation (NSF). NSF is an independent federal agency created by Congress in 1950 to promote the progress of science.

NSF supports basic research and people to create knowledge that transforms the future. CTIO, as part of the AURA Observatory in Chile, operates in Chile under Chilean law, through an agreement with the University of Chile and with the auspices of the Ministry of Foreign Affairs of Chile.

Provided by: National Optical Astronomy Observatory [Note: Materials may be edited for content and length.]