Fearsome Shark Takes Down a Pterosaur in Mid-Flight 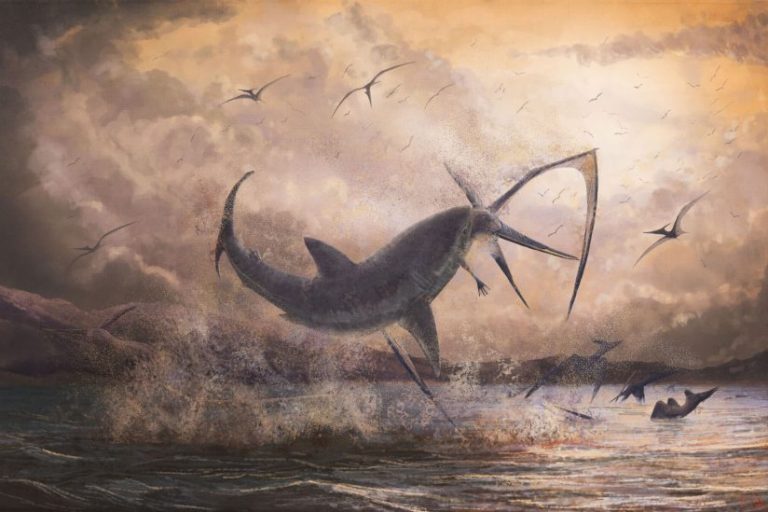 A USC scientist has documented the prehistoric occurrence of a shark species battling a pterosaur, a flying reptile. (Image: Illustration via Mark Witton)

USC researchers, studying bones at the L.A. County Natural History Museum, have found evidence of a fearsome shark taking to the sky to take down a pterosaur, a formidable flying reptile. It was a prehistoric clash of the ages that didn’t end pretty when a monster in the sky clashed with the beast of the deep.

The sorry outcome for one particular flying reptile is brutally recorded on a fossil where a shark chomped its neck, leaving a telltale tooth wedged against a vertebra. USC researchers who studied the bones kept at the Los Angeles County Natural History Museum say it’s a rare glimpse of wildlife interactions in the age of dinosaurs.

A window to a lost world, the findings help fill gaps about how a group of extinct flying creatures — pterosaurs — lived and behaved. The study appears in the Dec. 14 issue of Peer J — the Journal of Life and Environmental Sciences. The study’s senior author, Michael Habib, an assistant professor of integrative anatomical sciences at the Keck School of Medicine of USC and a research associate at the Natural History Museum, said:

“Understanding the ecology of these animals is important to understanding life on Earth through time.

“Are there sharks today that hunt seabirds? Yes, there are. Is that unique or have big sharks been hunting flying creatures for millions of years? The answer is yes, they have. We now know sharks were hunting flying animals as long ago as 80 million years.”

In the late Cretaceous period, North America was divided by a giant waterway called the Western Interior Seaway. It was a biologically prolific region from the Gulf of Mexico to Canada. Some of the world’s best fossils from this time are found here, including in the Smoky Hill Chalk region of Kansas, where this specimen was found.

The fossil was excavated in the 1960s and kept in storage at the museum before scientists plucked it from a display for further study. They were intrigued by the embedded shark tooth because of more than 1,100 specimens of Pteranodon, a species of pterosaur, only seven, or less than 1 percent, show evidence of predator-prey interaction, according to the study.

Pteranodon were masters of the sky. The gigantic flying reptiles abounded when dinosaurs walked the earth. Pteranodon sported a conspicuous crested skull, had a wingspan of 18 feet, and weighed about 100 pounds. They could travel long distances, land and take off in the water, and had a fancy for fish.

But ancient oceans were a dangerous place to linger. Under the waves lurked big, flesh-eating reptiles and sharks. And as fierce as the Pteranodon was, it was no match. But which sea monster killed it? How did it happen? And why was the neck bone intact?

First, the scientists had to rule out that the tooth, about 1 inch long, wasn’t randomly stuck to the Pteranodon vertebra; perhaps both had been deposited in a prehistoric boneyard at the same time. They found that the tooth was stuck between ridges in the neck vertebrae, which was clear evidence of a bite.

The tooth belonged to Cretoxyrhina mantelli, a shark common at the time. This particular predator was large, fast, and powerful, about 8 feet long and roughly comparable in appearance and behavior to today’s great whites, though it’s not closely related.

Second, scientists wondered why the evidence of the attack was preserved at all. Typically, heavy shark bites utterly shattered pterosaur bones, leaving little trace. In this instance, the tooth just happened to get stuck on a particularly bony part of the neck, which led to the fortuitous fossil. Such a fossil discovery is so rare that this is the first documented occurrence of this shark species interacting with a pterosaur, the study finds.

Third, while investigators may never know exactly what happened, Habib said it’s possible the attack occurred when the Pteranodon was most vulnerable, sprawled atop the water. While a Pteranodon could land and take off on water, they were ungainly at sea and took considerable time to take off. Habib said:

“We know big sharks ate pterosaurs, so we could say a big fast predatory species could very well have eaten this Pteranodon when it entered the water, but we’ll probably never know exactly.”

Provided by: Gary Polakovic, University of Southern California [Note: Materials may be edited for content and length.]