Did a Chinese Sailor Discover America Before Columbus? 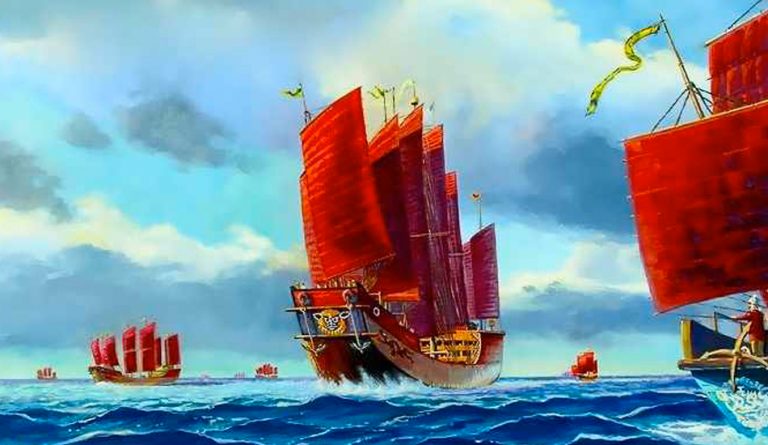 Zhang He traveled the seas for 30 years. (Image: via greendragonssociety)

The discovery of America is often attributed to Christopher Columbus, who is said to have landed on the continent in 1492. However, a 1418 map discovered in China is seeking to rewrite history as it depicts both Americas with great accuracy. The map is believed to have been used by the famed Chinese sailor Zheng He.

Did a Chinese sailor discover America?

The map was discovered by a Shanghai lawyer, Liu Gang, in 2001. He had bought it from a local dealer for just US$500. Gang believes the map to be proof that Zheng He not only reached America, but also Australia. Two years later, author Gavin Menzies used the map as evidence for his book entitled 1421: The Year China Discovered The World.

The map shows two hemispheres of the planet, with North and South America shown on one side. Even the rivers running inland have been depicted quite well. The Himalayas have been marked as the highest mountain range in the world. While initially, the map was seen as breakthrough evidence for China’s discovery of America, it was soon found to be false.

For one, the map is not actually from 1418. Instead, it is an 18th-century map that claims to be a copy of the 1418 map. Secondly, the detailed depiction of inland rivers of the Americas would have been impossible for Zhang to complete given that his voyage across the world only lasted 30 years.

Thirdly, only by the 19th century was the Himalayas acknowledged as the world’s greatest mountain range. Finally, the map is a three-dimensional rendering of the globe on a flat sheet. Chinese cartographers never used this style of projection until Europeans introduced it. As such, the claim of the map being from 1418 is not taken as true.

Professor Timothy Brook from the University of British Columbia believes the map to be a copy of a European map from the 17th century. “I had high hopes when I first heard about the existence of such a map… But I can see now that it is an entirely ordinary map that proves nothing,” Gong Yingyan, a historian at Zhejiang University and a leading map expert, said to The New York Times.

The hype surrounding Zheng He

It is believed that the hype around Zheng He’s discovery of America before Columbus is another one of Beijing’s attempts to project to the world that “the Chinese did it earlier than the West.” Chinese President Xi Jinping has positioned Zheng as a ‘friendly emissary’ who was trying to bridge the East and the West.

“The debate over the veracity of this map is emblematic of the current arguments over China’s role on the world stage. President Xi Jinping hails Zheng He as one of China’s great innovators and an example of its early, peaceful exchanges overseas. Though he does not claim that Zheng He found America, he holds up his voyages as an inspiration for a new maritime silk road that is now being promoted to expand Chinese trade and influence abroad,” according to The Economist 1843.

During his three decades of travel, Zheng He journeyed to Southeast Asia, India, the Persian Gulf, and even the east coast of Africa. His death in 1433 marked the end of China’s exploration of the high seas.