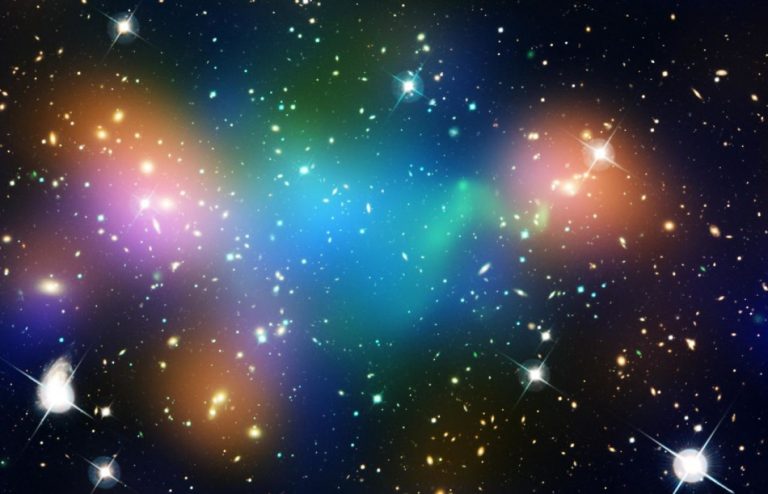 Dark matter is supposed to account for 85 percent of all matter in the universe, but so far scientists have not been able to detect it. (Image: via NASA)

Dark matter is supposed to account for 85 percent of all matter in the universe. Despite such widespread presence, scientists have not been able to detect any dark matter even though countless man-hours have been spent on the quest. Now, new research suggests that it might be a good idea to look for dark matter detectors in rocks.

Scientists try to detect dark matter particles by looking for evidence for Weakly Interacting Massive Particles (WIMPs). When a WIMP knocks regular matter, the nucleus of the atom will recoil and emit some form of energy like a sound wave or light. By detecting such emissions, the existence of dark matter particles can be confirmed. Traditionally, such detection instruments have to be buried deep beneath the ground so that they are not affected by cosmic rays, which can also make the nucleus recoil.

When Andrzej Drukier, a physicist at the Stockholm University, came to know Russia had boreholes that go to a depth of over 7 miles, it intrigued him. A typical dark matter detector will spend several years trying to detect WIMP interactions while being buried deep inside the earth. However, minerals are also known to be sensitive to WIMPs.

“These chunks of rock, removed from the very, very deep cores, are actually a billion years old… The deeper you go, the older it is. So suddenly, you do not need to build a detector. You have a detector in the ground,” Andrzej said to Quanta Magazine.

Together with his team, led by Katherine Freese, a theoretical physicist at the University of Michigan, they published a paper describing how paleo-detectors could be used to detect dark matter particles. Initially, they were criticized for not addressing the noise contributed by uranium decay. Later, the team spent two months sorting through thousands of minerals to determine which ones were isolated from uranium decay.

They found that rock salt would make a good paleo-detector. Plus, minerals with lots of hydrogen were also discovered to be ideal since they block neutrons that emanate from uranium decay.  For now, the team is focused on demonstrating that it can find recoil tracks left by solar neutrinos and prove that they can isolate WIMP trails from these recoils. Only then do they have a chance of getting the paleo-detector approved by the scientific community as a valid way to detect dark matter particles.

Of the many dark matter experiments being conducted in 2019, the one being scheduled at the Laser Interferometer Gravitational-Wave Observatory (LIGO) is crucial. The detector at the facility had observed gravitational waves in 2015. And in 2019, LIGO will begin its third observation.

What is interesting about the experiment is that scientists have proposed that signals of dark photons might turn up in the LIGO data, making irregularities in the signatures of the gravitational waves. “We show that both ground-based and future space-based gravitational wave detectors have the capability to make a [conclusive dark matter] discovery,” the researchers stated (Live Science). As such, scientists who study dark matter will look at the LIGO experiment with deep interest this year.

Another event to watch out for will be the operation of the first light at the Large Synoptic Survey Telescope (LSST) in Chile, which is scheduled to go live this year. The telescope will take detailed images of the sky once every 15 seconds, finishing a full sky scan in three days. By comparing the images over several years, scientists hope to understand how dark matter pushes and pulls the universe.