Storm Boy and the Endangered Coorong 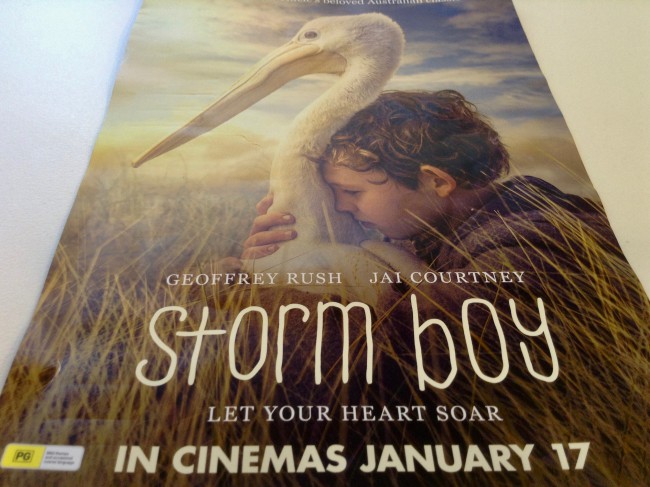 Experience the heart-warming story about the friendship between a young boy and a pelican in Australia's Coorong. (Image: photo of a Storm Boy flyer via Trisha Haddock.)

Expeience the heart-warming story about the friendship between a young boy and a pelican in Australia’s Coorong, which is retold and based on Colin Thiele’s book, Storm Boy.

Mike Kindley is Storm Boy grown up, and now he’s a successful retired businessman. He sees visions of his Indigenous friend he knew from childhood and pelicans. He is reminded of his childhood living with the pelicans, especially one called Mr. Percival.

His granddaughter, Madeline, is angry because her father’s business decision could lead to destroying the Australian wildlife and landscape. Madeline holds anger as he did toward his father. Mike shares with her his time living by the sea with his father and the pelicans. In his story, he reveals to his granddaughter the wonder of the beautiful pelicans. An important message of saving and respecting nature is weaved through the storyline, placing you in a picturesque landscape by the sea with the pelicans.

Mike and Madeline fly in a helicopter to where he once lived in the Coorong. On arrival, they both take their socks and shoes off to walk in the sand. His granddaughter’s anger is resolved as Mike saves the day with a phone call saying the business deal isn’t going ahead.

Watch the official trailer of the film Storm Boy:

The new version of Storm Boy is directed by Shawn Seet. At the age of 12, Shawn Seet moved to Australia. He watched the original Storm Boy movie and remembers it to be a memorable and moving piece of cinema. “I was cut off from the world, then one day the world came to me.”  The film stars Oscar and Golden Globe winner Geoffrey Rush. Rush offers up a true to life portrayal of Micheal Kindley and his experience in the film with the pelicans as a child.

The film also stars Finn Little. He is 11 years old from Queensland, Australia, and making his feature film debut as Storm Boy with a great heart and bravery. You can see his bond and care with the pelicans, as he hugs Mr. Percival’s soft long neck and body. In the film, you see Storm Boy teach the birds to catch fish and run along the beach flapping his arms showing them how to fly. ” The birds were amazing to work with; they do what they’re told. They’re funny, clumsy things,” said Little to The Advertiser.

At the time of the premiere of the film, Little visited the Adelaide zoo meeting up with co-star Mr. Percival. The memorable Mr. Percival is played by five Pelicans, two of them being Salty and Skye. The five Pelicans were rescued from an abandoned nest on Bird Island, in the Coorong. They were trained for the role of Mr. Percival. “It was quite emotional for me because I spent 12 weeks with them, every day, so it’s a big thing to see them. They’ve definitely grown since I’ve seen them last,” said Little to The Advertiser.

Trevor Jamieson was born in Subiaco, Western Australia, and is an award-winning actor in theatre, film, and television. Trevor has previously played Fingerbone Bill in the stage version of Storm Boy. Now, in the revival film of Storm Boy, he brings to life the Indigenous character Fingerbone Bill and gives Storm Boy some words of wisdom. I enjoyed the part when Fingerbone Bill tells Storm Boy the Dreamtime story about the pelicans.

In ‘Storm Boy,’ the Coorong is saved

In the movie Storm Boy, the Coorong is saved and a vast area is a protected national park. Today, the reality is this amazing landscape and animals are in danger. The Coorong is 156 km southeast of Adelaide, South Australia, on the end of a river system called the Murray-Darling Basin.

Two of Australia’s major rivers are the Murray River, 2,508 kilometers in length, runs along the Victorian and New South Wales to Wentworth, where it meets the Darling River, which is 1,472 kilometers long and flows from Queensland and joins the Murray River at Wentworth. The two rivers continue as one through South Australia to the sea at the Coorong. Countless farms of agriculture and horticulture use this river as a water source. Numerous townships survive on these two rivers as a water source. The Coorong is sometimes known as the Murray Mouth because if this area is not working efficiently, the river becomes sick and is in danger. The mouth could close and a water source for so many people and animals would be in danger.

The south lagoon of the Coorong is at the end of the Murray Darling Basin. It holds salt water and this salty lagoon can contain salt that is three times as salty as the sea. The lagoon increases it’s salt as it runs 100 kilometers further from the north lagoon down to the south, creating a change in biodiversity. A large amount of salt has been a part of the natural state for a few hundred years and the biota here like the high salinity. Many birds come here to feed and it is South Australia’s main habitat for pelicans. Ecologist David Paton has found problems with the eco-system with algae growing in the water. This type of algae doesn’t survive in conditions that are too salty. Fish are not able to eat the sea plant with algae growing on it.

Bird data collected shows the numbers of birds are dying and are now at a record low. Records show the shorebirds are in the most danger. Recently, over a million native fish were found dead upstream and ecologists warn more will occur. South Australia has spent AU$8 billion trying to fix the problem and the government is still unsure on how to save the Coorong.

I hope the movie Storm Boy encourages everyone to find a solution to save the Coorong. For more information about Storm Boy, check out the website: StormboyThefilm.com