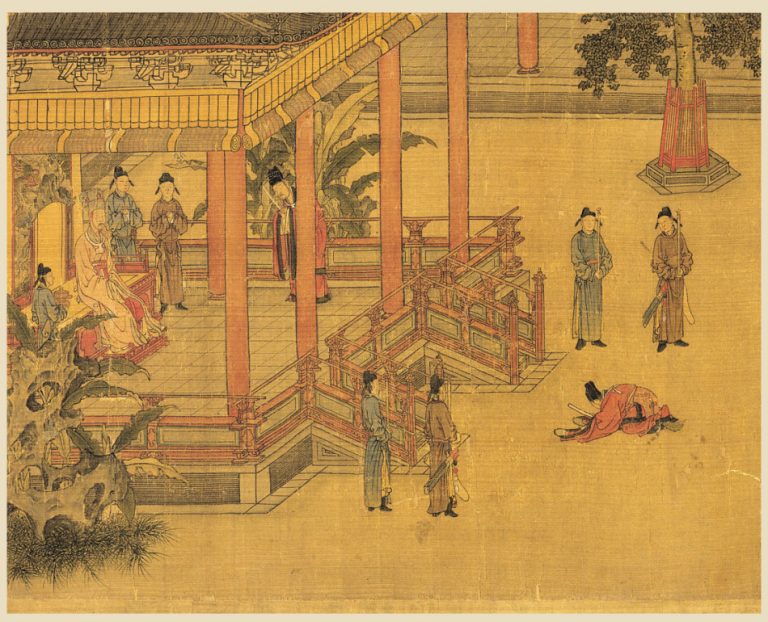 The album with this work is known as the 'Illustrations of the Classic of Filial Piety.' (Image: via Wikimedia Commons)

In the Qing Dynasty (1850-1876) during the reign of Xianfeng and Tongzhi, there was a woman with great filial piety who looked after her mother-in-law. After a tragedy and a misunderstanding, she was accused of a terrible crime. Fortunately, thanks to the keen wisdom of a county magistrate, her case was resolved.

In modern times, it is very common to send our elders to old-age homes to be taken care of by strangers. To understand the significance that filial piety played in ancient China, one needs to understand the school of thought it is culturally founded on. In Confucian and Chinese Buddhist ethics, filial piety (Chinese 孝, xiào) is a virtue signified by showing respect to one’s parents and elders, including one’s ancestors.

Filial piety is a key virtue to the Chinese

In a very general sense, filial piety means one should be good to one’s parents and take care of them, but beyond that, one should also conduct oneself well toward one’s parents, not just at home, but also in public, thus positively influencing both one’s family name and the heritage of one’s ancestors. Filial piety is not only considered a key virtue in Chinese and other East Asian cultures, but also among other more ancient cultures in the world where the needs of the community in the form of the family outweighed the sometimes more selfish needs of the individual. Thus, the following story took place in a setting when filial values were very prevalent in Chinese society.

The mother-in-law who could not bear the shame

When the news spread of the mother-in-law’s death, the authorities were informed by the village head, who accused the daughter-in-law of murdering her mother-in-law. The woman knew she was innocent and that if she told the authorities what she had seen, she could prove her innocence. But as she was also a very filial woman who didn’t want to hurt the dignity of her family, relatives, and ancestors, she decided to remain silent and not reveal her mother-in-law’s scandal.  As a result, the woman was wrongly charged and did not defend herself.  The county magistrate judged this case according to standard law and not long afterward, the woman was transported off.

After some time had passed, it came to be that the old magistrate was succeeded by a new one who was well respected, Mr. Zhang. Mr. Zhang, to get familiar with the current affairs, reviewed some of the cases, including that of the filial woman who had been charged for murdering her mother-in-law.  He sensed that something was not right, because the facts did not add up. After visiting the woman in her cell and reflecting upon her calm and refined expression, he concluded: “This woman does not look like a criminal who would be capable of killing her mother-in-law, no matter how you toss the coin.”

Mr. Zhang repeatedly interrogated the woman, who repeatedly confessed to her crime, saying: “I bear the responsibility of being unfilial and the crime resulting from it. Do I have any face worth living for? Dear sir, all I beg for is a quick death.” No matter how convincing the woman tried to be, the more convincing she spoke, the more Mr. Zhang believed that the woman was innocent: “I can’t put my finger on it. But my heart and conscience tell me that you are innocent.” The magistrate decided to help the woman resolve the injustice that had fallen upon her as a result of her seemingly unbreakable filial character.

The magistrate thought of a strategy to help the woman and so he devised a plan. In his office, there was a bailiff whose wife was quite tough, unreasonable, rude, and bossy. She was famous for being a tiger-like wife. Mr. Zhang thought that if he could somehow use this to his advantage, his plan could work. So Mr. Zhang called the bailiff and told him: “There is official business that I require you to immediately take care of. Take my place and go to the neighboring county. But, first go home and change your clothes, and quickly come back to receive your assignment.” Zhang knew that it would not be an easy task for the bailiff to go home and quickly do anything, knowing his wife’s temperment.

Eventually, the bailiff managed to arrive back at the office, having changed his outfit and gotten past the “tiger-like claws” of his wife. Mr. Zhang, having premeditated the outcome, said to the bailiff with a scolding voice: “You stayed at your house for such a long time and only arrived back now, delaying this important business. Did your wife hold you up?” The bailiff nodded and, in almost the same breath, ordered his fierce wife to be taken into custody, with a recommendation by the magistrate that she be put into the cell with the filial woman.

Although the bailiff’s wife was fierce, unreasonable, rude, and bossy, she was innocent. So, day in and day out, she would go on cursing and protesting the injustice brought upon her. She cursed so much that she turned the prison upside down, leaving no one with a moment’s peace.

One day, the filial woman, who was locked in the same cell as the bailiff’s cursing wife, could not take it anymore and called out: “Who doesn’t have injustice under Heaven! Even though I did not commit a crime, I’m still facing such a serious charge and hardship without saying a word. Your matter is very insignificant; please rest for a while and stop cursing!” Mr. Zhang had assigned someone to sit below the window outside of the cell and report to him as soon as he heard a conversation between the two women. Mr. Zhang was very pleased when he heard the content of the conversation. Almost immediately, he called a hearing for both of the women and asked the filial woman what she meant by her statement earlier. The woman knew she could no longer hide the facts, and so she explained the true circumstances to the magistrate. With this, which happened within a hair’s breadth of having her death sentence carried out, Mr. Zhang absolved her and saved her from an unjust sentence.

As an old proverb says: “Heaven helps the worthy.” Shortly after the case was resolved, Mr. Zhang was transferred to Donghu. Mr. Zhang was neither related to nor in any way affiliated with the filial woman. Yet his heart was moved, and his reasoning realized that she was innocent. With this, he felt it was his duty to find a way to clear the woman’s name and resolve the case against her. Maybe this was Heaven’s pitty on the woman, who even when facing life and death did not waver in her filial piety.

Translated by Fu Ming and edited by Hermann Rohr