The Mysterious ‘Chinese Romans’ of Liqian 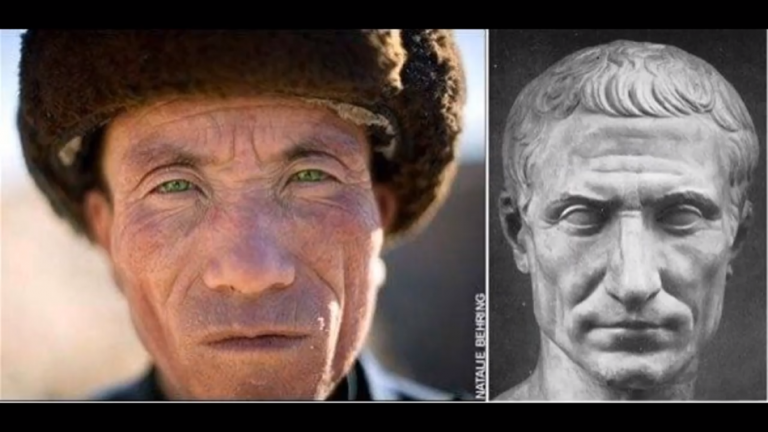 It is common to see people in the remote village of Liqian, China, with long noses, fair hair, and green or blue eyes. (Image: Screenshot via YouTube)

In the remote village of Liqian in China, you will come across people with long noses, fair hair, and green or blue eyes. They allegedly descended from an ancient group of Roman soldiers, a claim that has been hotly contested among academics.

The theory of the Liqian population descending from Roman soldiers was first put forward by Homer Dubs, a professor of Chinese history at Oxford University. He believes that the Roman soldiers settled in Liqian following a violent battle between the Roman army, led by Marcus Crassus, and the Parthians in 53 B.C.

“Thousands of Romans were slaughtered and Crassus himself was beheaded, but some legionaries were said to have escaped the fighting and marched east to elude the enemy. They supposedly fought as mercenaries in a war between the Huns and the Chinese in 36 B.C. — Chinese chroniclers refer to the capture of a ‘fish-scale formation’ of troops, a possible reference to the ‘tortoise’ phalanx formation perfected by Legionnaires. The wandering Roman soldiers are thought to have been released and to have settled on the steppes of western China,” according to The Telegraph.

Dubs became interested in the subject after discovering that Liqian translated to Rome in ancient Chinese. In 2005, scientists took DNA samples from 93 residents of the region. The results showed that some of them had as much as 56 percent Caucasian origins. A few years later, another DNA test was done. However, this time, the results came out negative.

“Liqians are closely related to Chinese populations, especially Han Chinese populations, whereas they greatly deviate from Central Asian and Western Eurasian populations… Overall, a Roman mercenary origin could not be accepted as true according to paternal genetic variation, and the current Liqian population is more likely to be a subgroup of the Chinese majority Han,” the report concludes.

Is Liqian a fake legend?

In addition to conflicting DNA evidence, lack of archaeological evidence also casts doubt on the Roman origin theory of Liqian residents. “For it to be indisputable, one would need to find items such as Roman money or weapons that were typical of Roman legionnaires… Without proof of this kind, the story of the lost legions is just a legend,” Maurizio Bettini, an anthropologist from Siena University, said in a statement (The Daily Beast).

Italy has reportedly joined hands with China and set up the Italian Studies Center in Lanzhou University to track Roman ancestry in the region. The main focus will be to collect archaeological evidence to support their theory. Meanwhile, locals of Liqian are already convinced that they have Roman ancestry.

Though some of the residents talked about Roman tombs having existed nearby, nothing has been confirmed by researchers. This has not stopped villagers from propagating the story of their Roman origins. In fact, they seem to be actively promoting it in hopes of generating tourism revenues.

At the town’s entrance, a new pillar was erected a few years ago that was designed in the ancient Roman style. Some locals also wear Roman soldier battle gear and entertain visitors to the region. People from Italy are said to be the majority of tourists. A Roman-style hotel has been built as accommodation. Despite such enthusiasm from residents, the question of whether they truly are descended from Roman soldiers is something that has not been answered conclusively.