The World Is Sinking Into a Debt Crisis 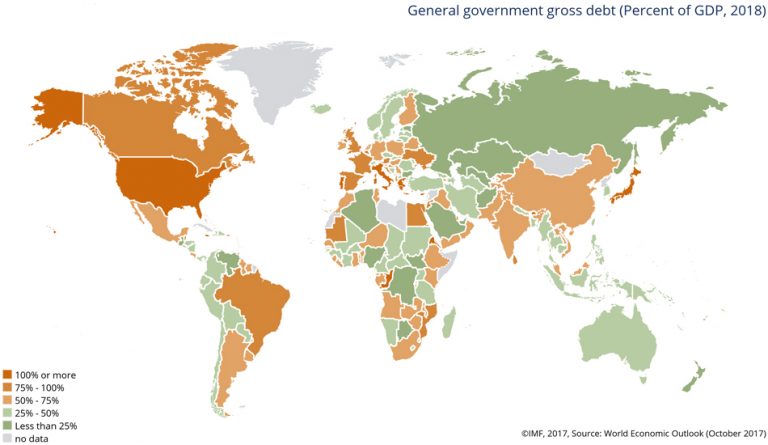 As of early January 2019, the total global debt was nearing US$244 trillion, exceeding 300 percent of world GDP by the third quarter of last year. This has made the International Monetary Fund (IMF) issue warnings to the world governments to control their debt levels and create enough buffers to protect themselves against a future debt crisis.

Total government debt crossed US$65 trillion in 2018, up from US$37 trillion just 10 years back. The U.S. accounts for nearly 32 percent of it. Financial sector debt amounts to US$60 trillion, while the non-financial corporate debt is now more than US$72 trillion. Meanwhile, household debt has surged to US$46 trillion, mostly due to strong growth from emerging markets like China, India, Mexico, Chile, and Korea.

However, many of these debts will be maturing very soon and present a big problem to the global financial markets as certain countries may not be able to meet payments. According to a report by McKinsey, Turkey is in a sensitive situation this year. Its currency has been sinking for most of last year and is weak right now. Over the past few years, Turkish companies have borrowed large sums of money to finance their businesses. Many of these bills will soon come due.

Since the Turkish government has acted as a guarantor for significant amounts of these debts, they will be liable to pay them in case the firms themselves are unable to service the debts due to lower revenues. The weak lira makes repayment of dollar loans very expensive. Developing countries like South Africa, Russia, Brazil, and Indonesia will also face a similar situation over the next few years as they might not have enough euros and dollars to pay back loans.

“We’ve depended on emerging markets to bring up global growth, some of it due to a credit boom… This is going to take a bite out of growth, which will affect the U.S., Europe, and the entire world economy,” Susan Lund, co-author of the McKinsey study, said to The Sydney Morning Herald.

The US and the developed world facing a debt crisis

According to the Cycle Research Institute, the combined debt of the U.S., Japan, China, and the Eurozone has increased by more than 10 times combined GDP growth over the past years. This is a no-win situation as far as developing countries are concerned. It essentially means that for every US$1 GDP growth that first world nations generate, they add US$10 debt into the economy. How long will it take before the world’s top countries also start to default?

Looking back at history, every unrestricted buildup of global debt has resulted in some kind of devastating economic consequence. The 2008 financial crisis was the last major financial crisis that the world endured. It not only dampened economic growth for a few years, but also created huge fear in the minds of investors. Though the world has recovered from it to a good extent, the current debt crisis can have a much bigger, long-lasting impact.

Market experts feel that a “reckoning” is inevitable, and that the global debt levels are far too high not to have a negative consequence. The question is what can we do when nations start to default on payments? Unfortunately, we may not be able to do anything. The world might enter into a prolonged phase of economic depression, one which can last a decade or more.