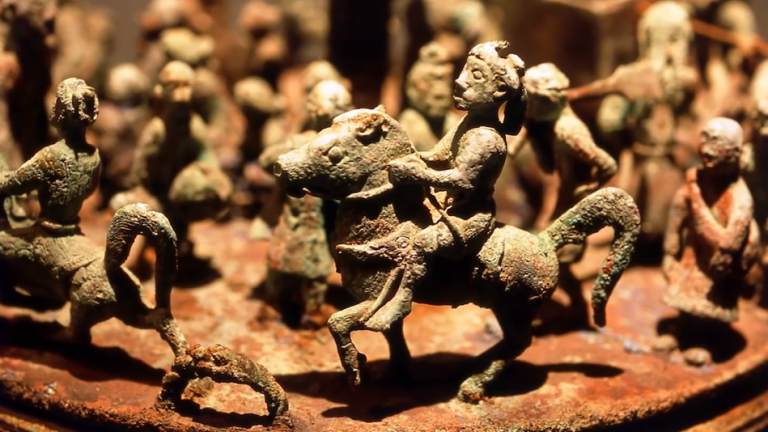 Interest in battle reenactments has been on the rise in China. (Image: Screenshot / YouTube)

Battle reenactments have been quite a niche activity in China for a long time. However, there has been a strong upsurge in the activity among many Chinese of late. In fact, interest groups are fast forming in Chinese cities, with members spending quite a good deal of money to create unique armor that they can wear during the reenactment of ancient battles.

With several decades of cultural suppression at the hands of the Communist Party, modern Chinese people are left with little connection to their cultural past. As people started to explore the way of life of their ancestors, a few of them thought of doing reenactments of ancient Chinese battles.

The idea was to be in the ancestors’ shoes by mimicking clothes, hairstyles, and armor to get a feel of how people in ancient China lived. Some feel that such reenactments allow them to get a good idea of how the Chinese people and nation evolved to the present day.

There are also those who dedicate their free time in pursuit of creating authentic armor for battle reenactments. A famous interest group in China is the Armor Alliance. Set up in 2016 by animation director Liu Shiwei, the nonprofit group aims to create awareness among the public about the history of Chinese armor.

Such a need arose after Liu realized that many Chinese TV shows and movies had scant knowledge of ancient Chinese armor and misrepresented ancient soldiers by dressing them up in armor designed in the European style. “Armor — a kind of traditional cultural art — has basically died out… The alliance aims to unite the very small number of armorsmiths and to find a way forward for armor,” Liu said to Sixth Tone.

There are also those who do reenactments as a way to get in touch with their “Fight Club” masculine nature. Since the current generation of Chinese men have grown up mostly in the safety of their homes and are engaged in desk jobs and repetitive tasks, many eventually feel that there is something lacking in their lives. When they don the armor and join up for a mock battle with hundreds of other men in a vast field, they feel a rush of nobility and courage that is in quite a shortage nowadays.

Since the Chinese civilization is very old, with some estimating it to have started around 6000 B.C., the country has had a long history of wars. The first recorded military activity dates back to around 2,200 B.C. to 1,600 B.C. at the time of the Xia Dynasty.

The first wars were mostly fought by common peasants using basic tools. As societies started getting complex and cities began to be established, the Chinese started creating new weapons like crossbows and catapults. The Chinese also developed “cloud ladders,” which were basically giant towers used to attack cities by breaching their walls.

When it came to armor, the Chinese usually wore it to protect themselves from arrows. They used the hides of rhinoceroses to create armor for soldiers. Unfortunately, the demand for such armor was so high that the animal was mostly wiped out from the country. The Chinese then started importing rhinoceros hides for armor.

Though a regular soldier wore a functional, minimalist armor that served solely as a tool of protection, the armor of generals was often elaborate to highlight their power and position. The horses of higher officers were also armored to protect the animal from enemy attacks.