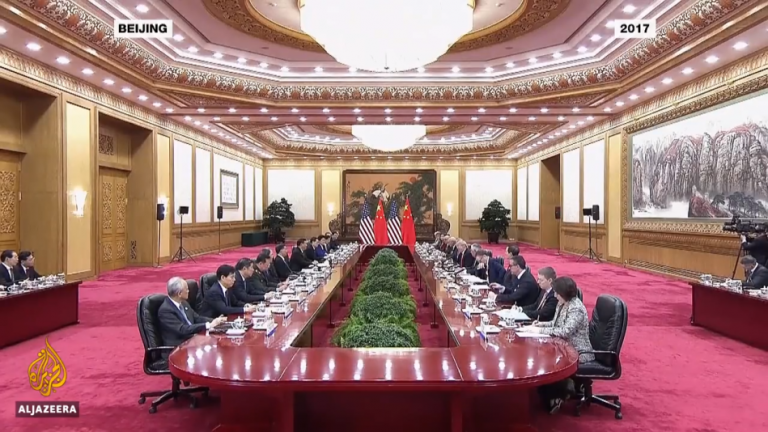 Tensions in the South China Sea region and the fight for influence in Africa pose a much bigger threat to U.S.-China relations than trade. (Image: Screenshot via YouTube)

The current trade conflict between China and the U.S. has made the financial markets nervous and infused uncertainty among investors and governments worldwide. But there are two issues that pose a much bigger threat than trade over the long term — tensions in the South China Sea region and the fight for influence in Africa.

As far as China is concerned, the South China Sea is their “backyard.” The claims of regions like Vietnam, Taiwan, or the Philippines are irrelevant from the Chinese perspective. Beijing would already have engaged in a war with those nations were it not for the fact that the U.S. has military bases in Korea and Japan and is committed to thwarting China’s supremacist attitudes. Countries like Australia, the UK, and France also have an interest in keeping the waters safe from Chinese domination.

The South China Sea conflict arises for two reasons. One, it is known to contain heavy deposits of valuable minerals. Two, around one-third of worldwide shipping traffic passes through here. The country that controls the South China Sea will be in a solid position to dominate world trade. No wonder the Chinese communists are so aggressive when it comes to claiming supreme rights over the sea.

For America, the South China Sea is an important pathway that connects to the crucial markets of Japan and Korea. Keeping the Chinese in check also contributes to reaffirming America’s prowess as a major naval force. If the Chinese are allowed to take control over the region, it would damage the U.S. military’s reputation. Hence, the United States cannot afford to lose to China in the South China Sea conflict. American presence also comes as a reassurance for smaller nations like the Philippines and Vietnam that would not be able to confront the Chinese alone.

Of late, the Chinese have been getting more aggressive. Beijing owns more warships than any country in the world. It has the second highest number of aircraft carriers and is also developing next-gen submarines. Some military experts feel that China will be able to take on the full force of America’s naval might within the next 10 years. As such, Beijing’s assertion of rights over the South China Sea is only expected to grow in the future, thereby increasing the chances of a military conflict.

Africa presents a huge opportunity for China. It is rich in natural resources that the massive Chinese population desperately needs. The continent is also a prime hub for cheap Chinese products. Given the little adherence to copyright laws and other intellectual property rights in African nations, the Chinese can keep selling knockoff products here with ease. Beijing has ramped up investments in the continent over the past few years and has developed deep connections with several African leaders. It is no secret that the Chinese have used corruption to get what they want in Africa.

Though China does spend in aid on the continent, America firmly remains the biggest donor to Africa. If China were to become the dominant player in the region, its economic might would easily multiply several times over. And with it, so too will China’s military aggressiveness. From a political perspective, China is very likely to allow corrupt, undemocratic regimes to flourish on the continent as long as they serve Beijing’s needs. This runs counter to America’s long-term plan to stabilize the region and bring Africa up as a major economic powerhouse.

With both countries vying for influence in Africa, military tensions could eventually develop over certain regions that might become important trade routes in the future. In 2018, China pledged US$60 billion in funds for Africa. In response, President Trump set up the U.S. International Development Finance Corporation (IDFC) and assigned a US$60 billion budget to facilitate more American investment in the continent.