Atlas the Robot Is Fascinating and Scary at the Same Time 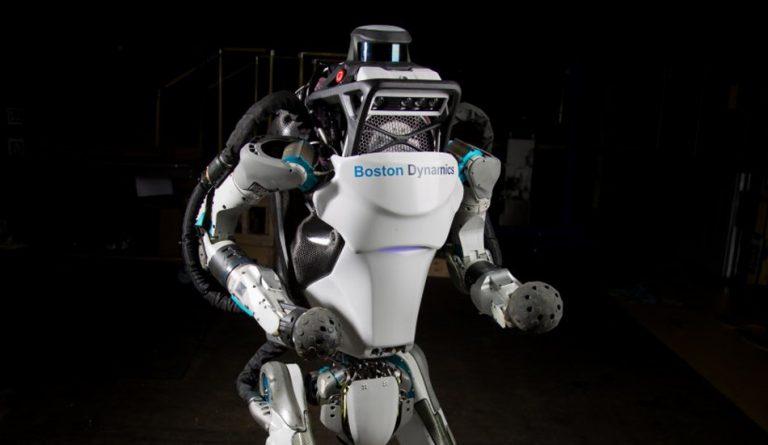 People are afraid of robots taking over. (Image: via Boston Dynamics)

The creation of robots that mimic human movements perfectly has been a long-standing dream of scientists all across the world. Boston Dynamics from Massachusetts is a robotics company that is taking humanity closer to such a goal. Atlas from Boston Dynamics is a humanoid that not only fascinates but terrifies because of its immense potential and inherent risks.

Atlas is nearly 5 feet tall and weighs around 165 pounds. The hardware uses 3D printing technology to save on space and weight, thereby resulting in a highly compact robot with an optimum strength-to-weight ratio. Atlas is capable of carrying a payload of up to 24 pounds. The robot is made up of 28 joints and its movements are powered by hydraulic actuation.

Atlas is equipped with numerous sensors that enable human-like movement, including stereo vision, range sensing, light detecting and ranging (LIDAR) sensors, and others. These allow Atlas to perform object manipulation and traverse a wide range of terrains. The machine is capable of maintaining balance even when pushed around aggressively. And in case it tips over, Atlas can get back on its feet in no time. A video of the robot in action has garnered over 31 million views.

“The control software uses the whole body, including legs, arms, and torso, to marshal the energy and strength for jumping over the log and leaping up the steps without breaking its pace (step height 40 cm).  Atlas uses computer vision to locate itself with respect to visible markers on the approach to hit the terrain accurately,” Boston Dynamic states (IEEE Spectrum).

Atlas has sparked mixed reactions on the Internet. While one group sees immense potential of robot workers in the future that can make human life more comfortable, others worry that such robots might end up serving not-so-humane causes and resulting in widespread death.

“I see a greater robotisation, in fact, future warfare will involve operators and machines, not soldiers shooting at each other on the battlefield… The soldier would gradually turn into an operator and be removed from the battlefield,” Lieutenant-General Andrey Grigoriev, Head of the Advanced Research Foundation (ARF), said in a statement (Analytics India).

According to some estimates, the U.S. might field more robots than human beings on the battlefield by 2025. While these will largely be drones and similar robots, many fear that the time is not far away when humanoid robots start participating in wars. Imagine millions of humanoids fighting against a similar number of enemy humanoids or humans.

The nature of war itself will change since it will cease to be a human versus human fight. Instead of a person’s courage, the quality of the machines will determine which side wins. Meanwhile, the United States Navy is said to be planning to deploy killer robot ships in the oceans. The U.S. Surface Fleet is looking into using unmanned, smaller-size ships in the world’s oceans.

“It’s a shift in mindset that says, instead of putting as much stuff on the ship for as much money as I have, you start thinking in a different way. You start saying: ‘How small can my platform be to get everything I need to be on it?’ We want everything to be only as big as it needs to be. You make it smaller and more distributable, given all dollars being about equal. And when I look at the force, I think: ‘Where can we use unmanned so that I can push it to a smaller platform?’” Rear Adm. Ronald Boxall, Director of the Surface Warfare, said to Defense News.

As the U.S. military integrates Artificial Intelligence and robots into its operations, the Department of Defense has developed a clear official policy regarding AI-driven weapons. It mandates that all such weapons must “allow commanders and operators to exercise appropriate levels of human judgment over the use of force.”