A Look at Thailand’s Kayan People 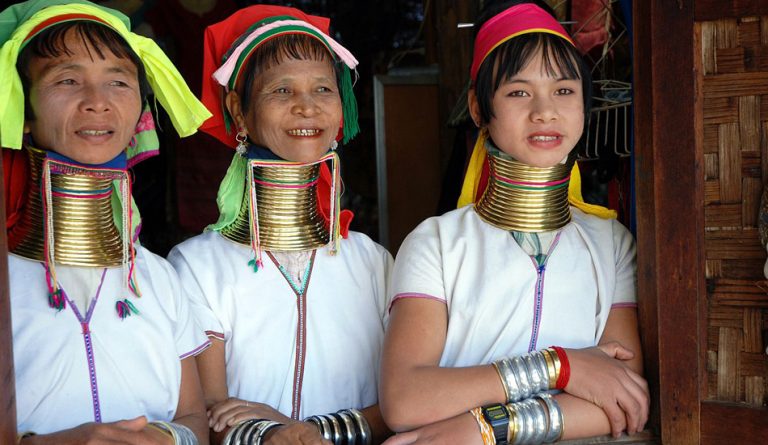 In Thailand, there is a tribe known as the Kayan or Padaung people. Originally from Myanmar, the tribe is popular the world over for its women who wear several coils around their long, elongated necks. According to estimates, there are about 600 Kayans in Thailand, while the global population of the community is estimated at around 130,000.

Kayans originally belonged to the “Red Karen” people from Myanmar. In the early 1980s, the conflict between the Kayans and the Myanmar army intensified. When failure became certain, the Kayan communities started fleeing to the border of Thailand where they eventually settled.

The Thai government granted them access to the country as economic migrants instead of refugees. However, their settlement came at a cost. Most of the Kayan men and women are not allowed to leave their artificial villages without a Thai ID card. And since they are not actually Thai citizens, they have very limited access to basic infrastructure and utilities like water, electricity, education, and healthcare.

When tourists started visiting them to check out and take photos of the long-necked women, the community jumped on the revenue opportunity. About 400,000 tourists visit the Kayans every year, with each of them paying anywhere between $8 and $16 for entry into the village.

However, the Kayans themselves are not paid this amount. Instead, it is the village owners (Thai natives) who keep the money. The community makes a living by selling handmade crafts and photo opportunities to the tourists. People in the village receive a basic allowance, with women getting an extra salary for wearing the brass rings.

The reason why Kayan women started wearing the coil is not known, neither to the anthropologists nor to the community members themselves. “Some say the rings would offer protection from tiger attacks often aiming right for the neck, others speculate it would keep rival tribes from abducting the women by lessening their beauty. Most likely would be the opposite, the sheer beauty and pride in putting emphasis on the women’s necks, giving the Kayan a divine grace,” according to Sinchi.

However, not every woman in the tribe likes to wear rings. Some wear them out of economic necessity. The women who wear brass rings are not allowed to discuss their plight with visitors. Anyone caught doing so will have their wages decreased. As such, the women keep smiling, photo after photo with random strangers.

Though the use of cell phones and computers is usually banned, some Kayan girls do end up checking out the Internet. And this has caused a big change among the current generation of women, with some even removing their rings and a few dreaming of visiting foreign lands.

The owners of the village usually become angry at such girls. They argue that refusing to wear the rings damages the village’s “attraction.” Combined with the fact that the women are not allowed to enter into work anywhere else due to their refugee status, those who opt out of wearing the rings live a harsh life.

Though many tourists have argued that it is unethical to visit the Kayan village since their visits keep the women chained to the tradition, the fact is that tourist visits are the main reason why women enjoy even the little freedom they have. Without the tourist income, the community might end up being neglected by the authorities.