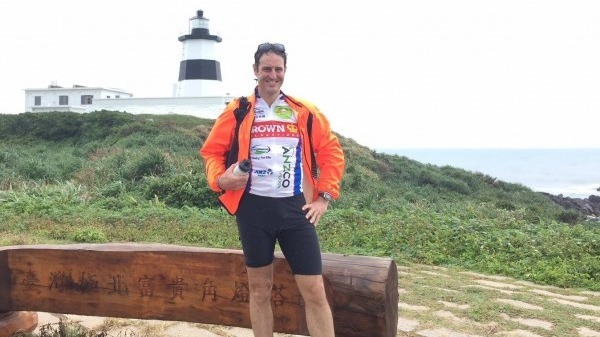 Australian Counselor Gary Cowan took up office in Taiwan in 2018. He loves nature and often participates in various outdoor activities. Gary also said that he likes the country very much for three reasons: its scenery, the food, and its people.

According to the United Daily News, Gary Cowan, the representative of the Australian office, loves nature. When hiking in Australia, he often climbs, walks, or camps. After he was stationed in Taiwan last year, he frequently asked friends to join him in outdoor activities.

At the end of October last year, Gary and his six friends from Taiwan University and the Ministry of Science and Technology climbed Mount Yushan together. The mountain left a deep impression on him. He also shared the beauty and history of Mount Yushan, the highest peak in the country, on Facebook in the Australian Office.

Gary said that before the trip to Mount Yushan, he went to Yangmingshan for running and cycling as a pre-workout exercise. “When climbing Yushan, at more than 3,700 meters, he felt dizzy and had a headache. Fortunately, a kind-hearted mountain friend gave him a cup of ginger tea to relieve his discomfort.”

Taiwan’s Mount Yushan is much higher than mountains in Australia

There are many mountains in Australia, but Gary believes that the peak of Yushan is almost twice as high and the slope is steep. The tall pine trees on the mountain are also impressive, which is very different from Australia.

“The scenery of Yushan is very beautiful. I finally understand why Yushan symbolizes Taiwan. One can see the picture of Yushan printed on the back of the thousand-dollar bill in Taiwanese currency.”

Gary was also amazed at the beautiful scenery of Hualien when he was invited by the Ministry of Foreign Affairs to visit the scenic spots such as Hualien Tailuge. He mentioned that: “Taiwan has very good food, like dumplings, and all kinds of Taiwanese snacks. And Taiwanese are very friendly, whether they are in the government, companies, or on the streets!”

At the National Day reception held by the Australian office in the country last month, Gary said: “Australia is Taiwan’s best partner in energy transformation. Taiwan and Australia share common ideas and values. I hope that bilateral relations will be closer this year.”