Amazing Storms on Uranus and Neptune Captured by Hubble Telescope 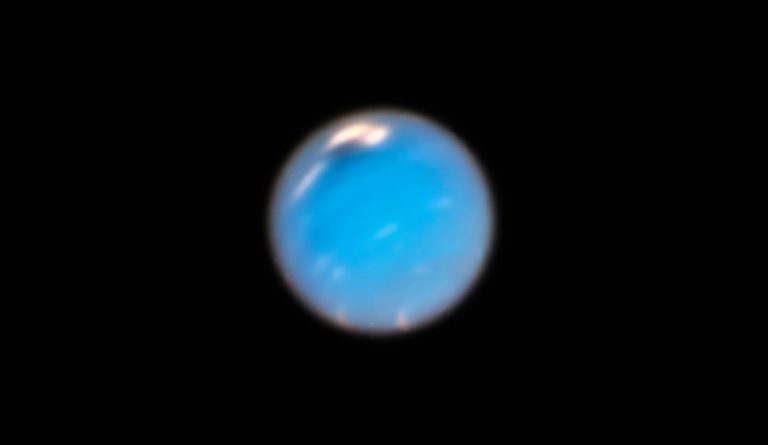 NASA’s Hubble telescope recently captured a series of images of Neptune and Uranus that show two huge storms on the icy planets. Images were taken during the telescope’s routine annual weather monitoring schedule. The storms on both planets were concentrated in the northern regions.

The storm identified on Neptune is massive, measuring close to 6,800 miles across, which is good enough to cover about one-fifth of the Earth’s surface area. The storm, named dark vortex, was seen alongside a few white clouds. Scientists believe that the clouds had formed because of the dark vortex plowing through the surrounding air above the storm. This makes the air cool rapidly, making it freeze, thereby resulting in the white clouds. The frozen material is estimated to be composed of methane.

This is the sixth dark vortex storm NASA has discovered on Neptune. The Voyager 2 probe had detected the first two storms in 1989 when it was passing by the planet. After 1993, the Hubble telescope detected the four additional storms, including the current one. The scientists at NASA believe that the dark vortex is mainly composed of hydrogen sulfide.

The dark vortex was initially expected to break up after moving north toward the equator. However, it stunned scientists by moving in the exact opposite direction. The vortex of the storm is believed to have developed deep within Neptune’s atmosphere, only becoming visible when the storm reaches the higher altitudes.

As for Uranus, Hubble detected a huge polar cap on the planet that dominates the entire northern hemisphere. The planet is currently in its summer season, with its north pole tilted directly toward the Sun. Researchers believed that the polar cap may have been formed because of the season’s effect on the planet’s atmosphere. A bright spot was also identified at the edge of the storm, which scientists estimate to be a methane ice cloud.

Hubble’s camera encountered a technical error in January, after which it could not take any new images of the universe. The U.S. governemnt shutdown went on to delay the repairs. However, the team at NASA did a quick restart of the equipment and the camera started functioning again. Thanks to this, the agency was able to capture excellent images of the storms on Uranus and Neptune.

While the storm images brought cheer to the scientific community, NASA also announced a sad development — the Opportunity rover on Mars was pronounced dead. The probe had landed on the Martian surface in 2004 and has been exploring the planet for the past 15 years.

“This is a hard day… though it’s a machine and we’re saying goodbye, it’s still very hard and very poignant, but we had to do that. We came to that point,” project manager John Callas said in a statement (The Globe and Mail).

The decision to abandon Opportunity was taken after the rover had been hit by a dust storm in June last year and stopped communicating with Earth. Over the next months, flight controllers reportedly sent more than 1,000 recovery commands. Since the rover did not respond and the program cost nearly US$500,000 a month, NASA decided to declare the probe dead and shut shown the project.