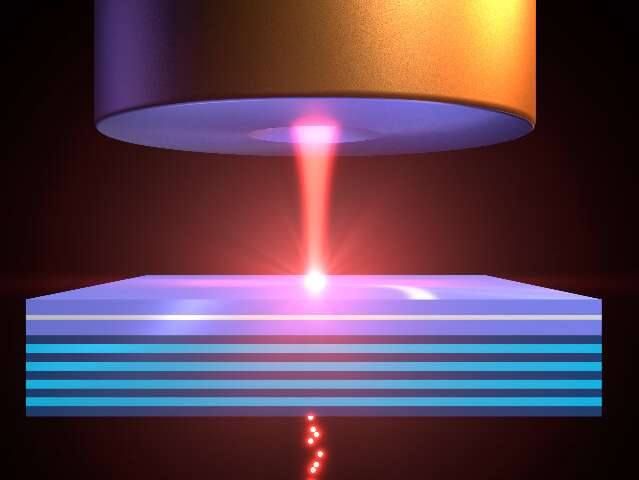 The ability to produce single photons on demand is hugely important for future applications in quantum communication and optical quantum information processing. (Image: via Macquarie University)

An international team of researchers out of Macquarie University in Sydney, Australia, has demonstrated a new approach for converting ordinary laser light into genuine quantum light. Their approach uses nanometer-thick films made of gallium arsenide, which is a semiconductor material widely used in solar cells. They sandwich the thin films between two mirrors to manipulate the incoming photons.

The teams’ research was published in the journal Nature Materials. While these quantum signatures are weak at the moment, the work opens up a new avenue for producing single photons on demand. Associate Professor Thomas Volz, from the Department of Physics and Astronomy and the senior author on the paper, said:

“The ability to produce single photons on demand is hugely important for future applications in quantum communication and optical quantum information processing.

“This means our approach could be much more amenable for massively scaling up, once we’re able to increase the strength of the quantum signatures we’re producing.

“We might be able to make identical quantum emitters from semiconductors by photon nanostructure engineering, rather than by direct materials engineering.”

“While real-world applications are still a fair bit away, our paper describes a major milestone that the polariton community in particular has been waiting on for the last ten to fifteen years.

“The regime in which polaritons interact so strongly that they can imprint quantum signatures on photons has not been accessed to date and opens up a whole new playground for researchers in the field.”

The Macquarie University team is part of the ARC Centre of Excellence for Engineered Quantum Systems (EQUS), and the experiments were carried out at the CSIRO labs in Lindfield, where part of the Macquarie quantum labs are based at present. The paper appears alongside a similar study carried out in parallel at ETH Zurich.