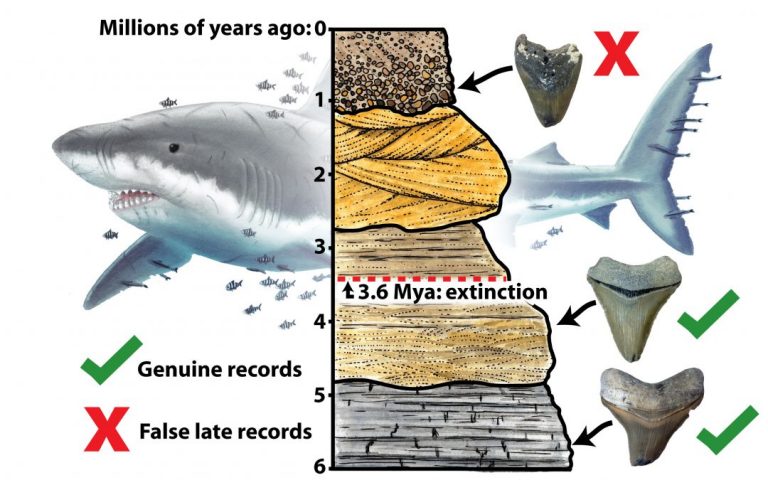 Megalodon — a giant predatory shark that has inspired numerous documentaries, books, and blockbuster movies — likely went extinct at least 1 million years earlier than previously thought, according to new research published in PeerJ — the Journal of Life and Environmental Sciences.

Earlier research, which used a worldwide sample of fossils, suggested that the 50-foot-long, giant shark Otodus megalodon went extinct 2.6 million years ago. Another recent study attempted to link this extinction (and that of other marine species) with a supernova known to have occurred at about this time.

However, a team of researchers led by vertebrate paleontologist Robert Boessenecker with the College of Charleston, Charleston, South Carolina, noted that in many places there were problems with the data regarding individual fossils in the study estimating the extinction date.

In the new study, the researchers reported every fossil occurrence of O. megalodon from the densely sampled rock record of California and Baja California (Mexico) in order to estimate the extinction. Morgan Churchill, a vertebrate paleontologist at the University of Wisconsin Oshkosh on the study’s research team said:

“Megalodon has become a prehistoric beast of exceptional public interest, as it was one of the largest sharks to ever have existed.

“Unlike dinosaurs and other prehistoric creatures, the megalodon only died out relatively recently, so some have speculated that it might even still be alive today.”

Besides Boessenecker and Churchill, the research team included Dana Ehret, of New Jersey State Museum; Douglas Long, of the California Academy of Sciences; Evan Martin, of the San Diego Natural History Museum; and Sarah Boessenecker, of the University of Leicester, United Kingdom.

The researchers found that genuine fossil occurrences were present until the end of the early Pliocene epoch, 3.6 million years ago. All later fossils either had poor data provenance and likely came from other fossil sites or showed evidence of being eroded from older deposits. Until 3.6 million years ago, O. megalodon had a continuous fossil record on the West Coast. Boessenecker said:

“We used the same worldwide dataset as earlier researchers but thoroughly vetted every fossil occurrence, and found that most of the dates had several problems — fossils with dates too young or imprecise, fossils that have been misidentified, or old dates that have since been refined by improvements in geology; and we now know the specimens are much younger.

“After making extensive adjustments to this worldwide sample and statistically re-analyzing the data, we found that the extinction of O. megalodon must have happened at least 1 million years earlier than previously determined.”

This is a substantial adjustment, as it means that O. megalodon likely went extinct long before a suite of strange seals, walruses, sea cows, porpoises, dolphins, and whales all disappeared sometime about 1-2.5 million years ago. Boessenecker said:

“The extinction of O. megalodon was previously thought to be related to this marine mass extinction — but in reality, we now know the two are not immediately related.

“It also is further unclear if this proposed mass extinction is actually an extinction, as marine mammal fossils between 1 and 2 million years old are extraordinarily rare — giving a 2-million-year-long period of ‘wiggle room.’

“Rather, it is possible that there was a period of faunal turnover (many species becoming extinct and many new species appearing) rather than a true immediate and catastrophic extinction caused by an astronomical cataclysm like a supernova.”

The researchers speculate that competition with the newly evolved modern great white shark (Carcharodon carcharias) is a more likely reason for megalodon’s extinction. Great whites first show up with serrated teeth about 6 million years ago and only in the Pacific; by 4 million years ago, they are finally found worldwide. Boessenecker said:

“We propose that this short overlap (3.6-4 million years ago) was sufficient time for great white sharks to spread worldwide and out-compete O. megalodon throughout its range, driving it to extinction — rather than radiation from outer space.”

Provided by: University of Wisconsin Oshkosh [Note: Materials may be edited for content and length.]