Despite 300 Broken Bones, This Indian Man Swims Like a Champ 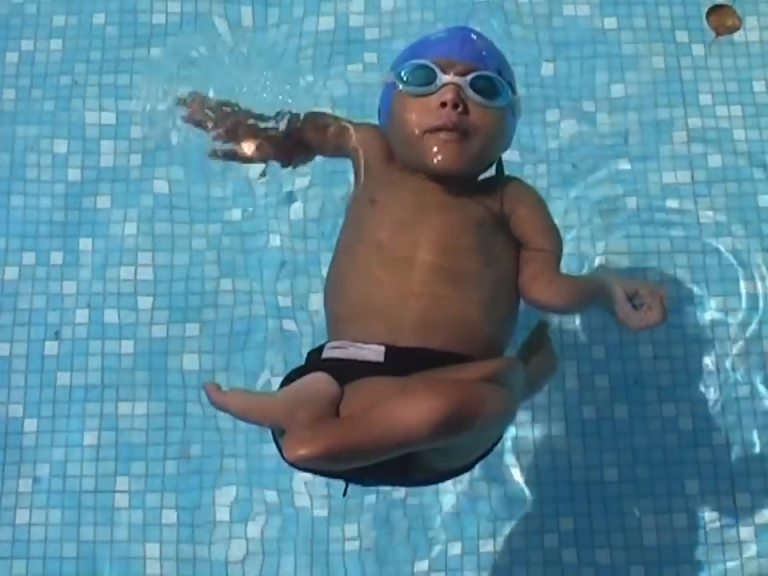 Moin Junnedi from India has a passion for swimming and has become an inspirational figure for many. (Image: Screenshot via YouTube)

A regular Indian man who has multiple broken bones in his body will typically choose to rest comfortably at home, avoiding any risk of worsening his condition. But Moin Junnedi from India, with hundreds of broken bones, is not regular. His passion for swimming has made him quite an international star and an inspirational figure for many.

Indian man with the broken bones

Born in the Indian city of Belgaum in the state of Karnataka, Moin has suffered from a medical condition called Osteogenesis Imperfecta since childhood, which is commonly known as Brittle Bone Disease.

His bones started fracturing when he was just nine months old. By the time he hit two years of age, Moin already had 50 fractured bones. At present, his body has over 300 broken bones. Because his legs are fused together he is confined to a wheelchair. However, when he hits the water, the 20-plus-year-old is an entirely different person.

Moin has been regarded as one of the best disabled swimmers in the world and has won numerous titles in multiple tournaments. In 2013, he bagged gold at the International Wheelchair and Amputee Sports World Junior Games held in Puerto Rico. And for this, Moin has his swimming coach, Umesh Kalghatgi, to thank.

“Initially, his parents were reluctant, but I convinced them to have faith in me. Training Moin was a challenge for me, but I took it as I wanted him to have hope and an aim in life… With his confidence and dedication, he learnt swimming in just few months and participated in his first competition just nine months after and won a gold medal,” Umesh said to the Daily Mail.

Moin’s parents are also thankful to Umesh for having come into their child’s life. The coach had instantly recognized the kid’s talent for swimming, inspiring Moin to overcome bodily defects and become the renowned swimmer he is today.

“We never felt ever that Moin is disabled and never imagine house without him. He is a friend, elder and motivational force to everybody in home. All this happened thanks to his coach Umesh Kalaghatagi,” Moin’s father Mushtaque said in a statement (India Times).

In addition to Moin, India has numerous other disabled athletes who have overcome their disadvantages and made a mark on the world.

Arunima Sinha made history in 2013 when she climbed Mount Everest. She became the first woman amputee and the first Indian amputee to have scaled the mountain. Later on, she went on to climb Mount Elbrus in Europe, Kilimanjaro in Africa, and Kosciuszko in Australia.

Arunima was not born with disabilities. She was always a healthy individual. But in 2011, a few robbers pushed her out of a moving train, from which she lost her legs. She dedicated the next two years of her life to determined training aimed at conquering Mount Everest.

Badminton champion Girish Sharma is another inspiring disabled athlete from India. When he was just two years old, Girish lost his limb in a train accident. However, he did not let the disability stop him from his interest in badminton. Eventually, he went on to win gold in the Paralympic Asia Cup for the disabled. Girish is known to train for six hours every day.