The Red String of Marriage and Predestiny 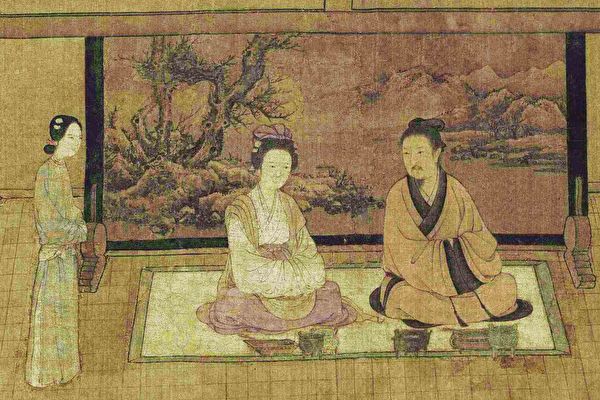 Lamei was very beautiful, and Tianbao had lustful thoughts towards her and wanted to seduce her. (Image: Public Domain)

In Xi’an City, there was a scholar named Weigu, who lived during Emperor Yuanhe’s reign in the second year of the Tang Dynasty. One day, an elder asked to meet Weigu in front of Longxing Temple early the next morning to matchmake him with the daughter of the former imperial chancellor (Sima) of Qinghe County.

Weigu agreed and rushed to the temple the following morning, just as the sun was rising. On the steps, he saw an old man with silver-grey hair. He was sitting under the moonlight, leaning against a big muslin bag and looking at a book.

“What are you reading? I don’t recognize a single word!” exclaimed Weigu. “This book is from the heavens. It’s a book of marriage registers for couples on Earth,” said the man with a smile.

“What’s inside the bag?” asked Weigu. “Red strings for binding husbands and wives together. A man and a woman are already tied together at birth. Their future marriage can’t be changed — whether they become wealthy or poor, beautiful or ugly, are separated by long distances, or even if their families are at war with each other, no one can escape the marriage as long as the red string ties them together,” explained the old man.

“Then, please tell me one thing — I am here to be matchmade with the daughter of Sima. Is this marriage in my fate?” asked Weigu. The old man consulted his book and replied, “No, it is not.”

Weigu was full of questions. “When can I marry? Where is my future wife? What is her family doing?” he asked. “You will marry your wife in 13 years’ time,” said the old man, while looking at his book. “She is the daughter of a vegetable seller named Nanny Chen who lives in the northern part of the Inn. Follow me and I will show her to you,” he continued while closing his book and getting up.

Weigu quickly followed the old man to a market, where he saw an old vegetable seller with one blind eye. She held a little girl in her arms, who was dressed in ragged clothes. “This is your future wife,” said the old man, pointing to the child. “She is 3 years old now; you will marry her when she turns 16.” “I didn’t expect to have to wait another 13 years to marry,” thought Weigu, looking at the dirty child with a running nose. “I am from a family of scholars; how can I marry the daughter of a countrywoman?” exclaimed Weigu, growing rather angry.

The old man laughed heartedly. “The red string is already tied; you cannot change it!” he finally said. “Can I kill her?!” said Weigu, growing furious. “You cannot,” replied the old man, who then disappeared.

Weigu returned home and only grew angrier the more he thought about the marriage. He grew so angry that he ordered his servant to kill the child. The servant felt apprehensive and ran away after hurriedly stabbing the child.

Thirteen years passed in the blink of an eye, as every year Weigu tried to be matchmade with no success. He became a military officer under Wang Tai of the Xiangzhou State, who admired him for his wisdom. Discovering that Weigu was still single, Wang Tai arranged for his 16-year-old daughter to marry him. Seeing how beautiful she was, Weigu was very satisfied. The young woman always had a colorful, decorative flower fixed between her eyebrows, which was only ever removed when bathing. Overcome with curiosity, Weigu asked her the reason.

“Wang Tai is actually my uncle and I’m not his biological daughter. I was adopted when I was a baby by Nanny Chen, who always took me with her to sell vegetables. When I was three, I was stabbed while at the market and I use this flower to cover the scar. My uncle began caring for me as a teenager, and I followed him here,” replied the young woman with tears in her eyes. Weigu was shocked. “Is Nanny Chen blind in one eye? Is the vegetable market near Songcheng Inn?” he asked. “Yes. How did you know?” asked the young woman. “The person who stabbed you was under my instruction,” confessed Weigu, who then told her about his encounter with the old man and his book.

Since then, Weigu and his wife cherished their predestined affinity and marriage, treating each other with love and respect.