Everything You Need to Know About the Chinese FAST Telescope 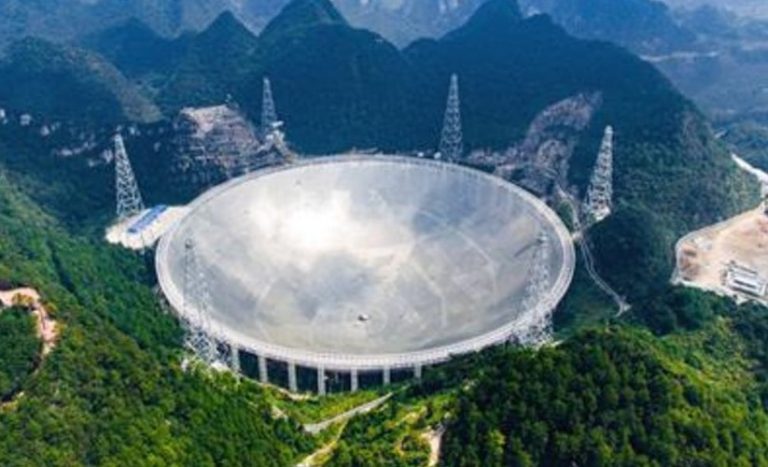 We’ve been staring at the stars and wondering what was up there for centuries. We’ve been using mirrors and prisms to construct telescopes to give us a better idea of what mysteries lie in the black, but we’re still limited in how far we can see. The FAST telescope in China is hoping to change that. Not only does it hold the title of the largest radio telescope in the world, but it doesn’t rely on mirrors or prisms to create a picture of the universe. Let’s take a closer look at the FAST telescope and why it is so unique.

FAST is an acronym standing for the Five-Hundred-Meter Aperture Spherical Radio Telescope, which opened its doors in 2016, and is the largest filled radio telescope in the world, and the second-largest single-aperture telescope. It comes in second to the massive RATAN-600 telescope located in Russia. It lives up to its name, made up of 4,450 triangular panels arranged in a gigantic geodesic dome that spans 500 meters or 1,600 feet.

Rather than digging up the landscape, The FAST telescope is located in a natural sinkhole in the karst, or limestone, ground. The majority of the dish is made from aluminum, with support from steel cables. There are 2,225 winches in place beneath the panels. These winches can be remotely activated to “tug” on the surface of the dish, creating an active surface that makes it easier to hone in on remote radio signals.

The problem of radio interference

The biggest problem with this type of telescope is the issue of radio interference. Electronic devices naturally interfere with one another because of the way their data is transmitted. You can’t put a radio telescope in the middle of a crowded city. Not only is it too big for that sort of placement, but the thousands of electronic devices in homes and businesses surrounding the telescope will also interfere with its ability to pick up interstellar radio signals.

On the other side of the coin, the strength of the incoming radio signals could interfere with phones and other electronics in the surrounding area. Not all sources of radio frequency interference are human-made — if you’ve ever heard a crackle on a phone line during a lightning strike, you’ve experienced natural RFI.

The FAST telescope is the centerpiece of Pingtang Astronomy Town. The area in the Guizhou Province was originally home to more than 9,000 people who were all paid to relocate to create a 3.1-mile quiet zone around the facility. This isn’t the first Radio Quiet Zone in the world. The Green Bank radio telescope in West Virginia has a massive 13,000 square mile quiet zone surrounding it.

Instead of family homes, Pingtang Astronomy Town is now home to hotels, housing for astronomers, and even things like a museum, a vineyard, playgrounds, and restaurants. This has attracted droves of tourists who want to come to see the “giant golf ball” that is the FAST Telescope.

This is a problem because these huge telescopes are super-sensitive — they have to be to detect remote signals from the edge of the universe — and are sensitive to RFI from everything from cell phones to spark plugs. Yes, even spark plugs emit a small amount of radio frequency interference. It usually isn’t enough to interfere with anything, except a telescope designed to detect radio frequencies from space.

The FAST Telescope might be the biggest in the world, but its ambitions are even more grandiose. The goal of the team that uses this telescope is to hopefully detect dark matter — which has been invisible up to now — and also listen for alien life in the universe.

We can’t wait to see what galactic mysteries this giant golf ball helps us solve.