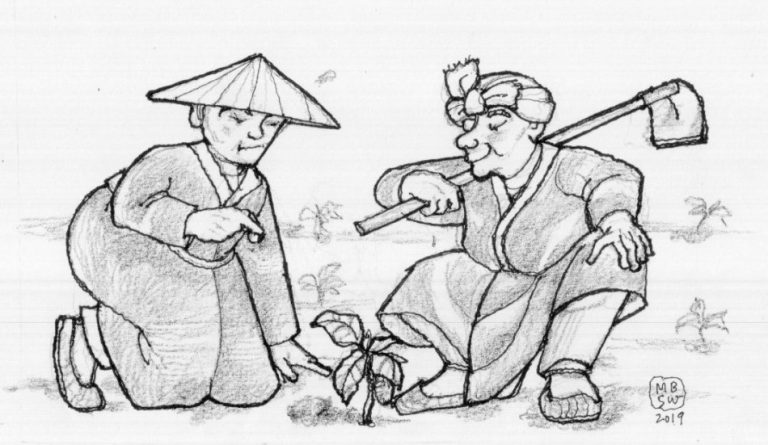 A farmer buries a penny under each eggplant according to the advice from another farmer. (Image: Bernadette Wolf / Nspirement)

One person went to a temple to pray for money. He asked a Taoist monk to explain in detail whether the sign he received was good or bad. The Taoist replied: “The sign will only be accurate if you have paid for it; otherwise, it will not be accurate.”

A similar joke was found in another book, Jokes Classics (笑林廣記), from the Qing Dynasty.

There was a farmer having a hard time growing eggplants. He went to get advice from an older farmer. The old farmer said: “This is not difficult; just bury a penny under each eggplant.” The farmer asked why. The old farmer replied: “They’ll live with money, and die without money.”

Good Laughs (笑得好) is a collection of short stories edited by Chinese doctor Cheng-Jin Shi (石成金) of the Qing Dynasty (1636-1912). This collection can be considered as the Chinese version of Aesop’s Fables. Dr. Shi was believed to have lived between the Kangxi and early Qianlong reigns. He also authored many other books on remedies for life and health.