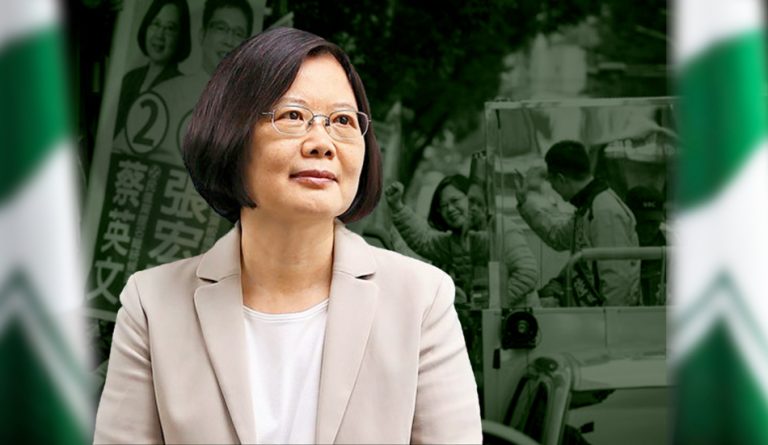 Taiwan's President Tsai Ing-wen stated that there is no chance of a peace deal with China unless use of force is ruled out. (Image: via Wikimedia Commons)

The Taiwan president, Tsai Ing-wen, has stated that there is no chance of her country entering into any peace deal with China unless Beijing commits to not using force against the island nation. Presidential elections in Taiwan are set for 2020.

The declaration comes on the back of the opposition party Kuomintang (KMT) suggesting they might sign a peace treaty with China if they were to win the upcoming presidential election. KMT is a pro-Beijing party that crushed Tsai’s Democratic Progressive Party (DPP) in local elections last November.

KMT’s Han Kuo-yu, the mayor of Kaohsiung City, is the favorite to beat Tsai in 2020 and has also publicly expressed his pro-China stance. “Taiwanese people have less and less time to avoid discussing a peace treaty [with Beijing]… Why? Because the dynamics of cross-strait relations are becoming more and more volatile,” he said in a statement (Nikkei Asian Review).

Han also supports the 1992 consensus that states Taiwan is part of “One China.” He accused Tsai of not “loving” the Republic of China. Han believes Taiwan’s purchase of weapons to defend against China is making Beijing angry.

Earlier, Chinese President Xi Jinping stated that Beijing might use military force if necessary to bring Taiwan under Chinese control and finally realize the dream of “One China.” Tsai responded sharply to the statement, with public opinion clearly indicating that citizens of Taiwan had no interest in joining the communist state and would rather fight than be controlled.

As such, Han’s criticism of Taiwan’s weapons purchase and support of the 1992 consensus comes as a surprise, since such a position goes completely against the people’s voices. Political experts believe that China is pumping in money to influence the 2020 elections and sway public opinion in KMT’s favor.

Meanwhile, Beijing is continuing its international pressure to remove any reference to Taiwan being an independent democracy. This is evident from the Mobile World Congress (MWC) 2019 being conducted in Spain where the island nation was listed as “Taiwan, China Province.”

Taiwanese authorities opposed the classification and asked MWC officials to remove the reference. However, organizers refused to comply with the request. Taiwan’s Ministry of Foreign Affairs (MOFA) condemned the organizer’s behavior and stated that their conduct violated the nature of non-political organizations. It was later found that the MWC was actually sponsored by Huawei.

Chan Ting, Chairperson of Taiwan’s National Communications Commission (NCC), has decided not to attend the event since he will be unable to register under the name of “Taiwan.”