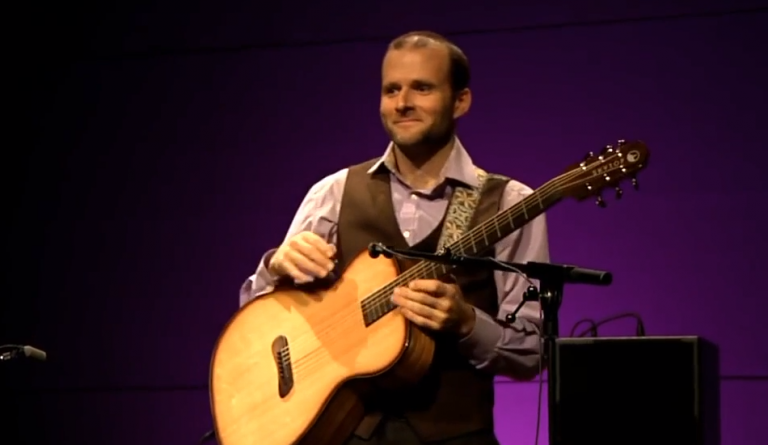 Nemanja Rebic, a New York-based world-class guitarist originally from Serbia, has always loved music and has had a special relationship with the guitar since his childhood. In 2006, he traveled to South India to study classical music and was taught by a musical master. In 2007, while on a bus in New York one day, a woman introduced him to a meditation practice called Falun Dafa, which interested him very much.

“The book of Zhuan Falun has many wonderful facts and solves my doubts about the universe. I follow Truthfulness, Compassion, and Forbearance to stimulate kind thoughts and strengthen my will so that I can always ask myself to be a good person,” says Nemanja, who took up the practice after reading more about it on the Internet.

Learning about the persecution of Falun Dafa in China by the Chinese Communist Party broke Nemanja’s heart, and he decided to spread awareness about the human rights atrocities through his music.

The song ‘Tiananmen Rose’ was inspired by Falun Dafa

His song Tiananmen Rose was inspired by a photo he saw of a female Falun Dafa practitioner at Tiananmen Square, bravely holding a banner defending the practice as a peaceful protest against the persecution. Lament was inspired by practitioners’ unwavering perseverance against the torture and abuse that has claimed the lives of many innocents since the persecution began in 1999.

Nemanja’s sincerity and musical performances have touched the hearts of many. He believes that great art is created from a pure heart and aims to display virtue through his music. Happiness, wisdom, moderation, sincerity, kindness, enthusiasm, and humbleness all have a place in his songs. He takes particular inspiration from oriental origins and traditions, and his music conveys a sense of hope for the future.